What Caused This Severe Nutrient Deficiency on Pygmy Date Palm? 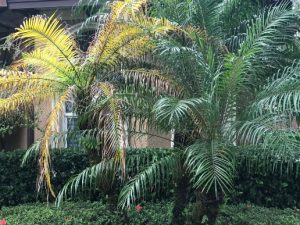 Have you seen this before? Two palms are growing side by side and one is showing symptoms of a severe nutrient deficiency and the other looks healthy. Sometimes the cause is simply a lack of nutrients in the soil, but if the palms are regularly fertilized, and there isn’t a reaction in the palm, then something else must be limiting the uptake. Typically, it is a cultural problem. Some of the possible causes could be:

My recommendation: The low pH could be causing a nutrient deficiency. I recommend raising the pH with dolomitic lime, which provides magnesium, at the rate of 5 lbs per 100 square feet (to raise pH 1 point). Continue with the UF recommended fertilizer, 8N-2P2O5-12K2O +4Mg with micronutrients with 100% of the N, K, and Mg in a slow release form. Also, remove the heavy layer of mulch to expose the root initiation zone. Since the palms have been regularly fertilized and the new growth is green, I would watch the palm this spring. Maybe it can turn around. I wouldn’t recommend pruning at this time.