A seller will always do their best to get you to buy their product. After all if they don’t sell, they don’t make money. So it is in the sellers’ best interest to make their product better than the rest of the competition. Or at least make you think their product is better. Think of how many car commercials you see on TV and hear on the radio. Ford, Dodge, Chevy, Honda, Toyota and more all telling you how their vehicle is safest, strongest, best MPG in class. You’ve heard it all before, but is there really that great a difference? In some cases maintenance is, but if you’ve driven one you can drive them all. This commercial marketing goes beyond cars and can be found in our grocery stores too. One of my favorite advertisements to see in stores is “hormone free” meat. If this is something you buy I have some uncomfortable news for you, no meat is hormone free. Think about what meat is, it’s tissue from a living creature that goes through a life cycle not very different from our own. That is to say all animals produce hormones just like we do. And so their tissue has levels of hormones in it too. Now don’t be alarmed, meat has had hormones in it since well before mankind started to cook it. These advertisements are trying to get you to buy their product for a premium even though the health and nutritional aspect of the meat are the same as their conventional counterpart. Now some of the more informed consumers will ask “What about implants?” That’s a good question, it proves that you are researching the topic. Now let’s research it a little more.

Implants are small pellets that contain a substance that slow releases growth hormones into the animals system. These pellets are administered into parts of the animal that we don’t eat namely the back of the ear. That way an implant never enters the food system. These implants can contain one or a combonation of 6 hormones. Three are natural hormones (testosterone, estradiol, and progesterone) and three are chemically similar synthetic hormones (melengestrol acetate, trenbolone acetate and zeranol). These implants allow the animal to have increased growth while maintaining its intake. Meaning, the animal produces more muscle for the same amount of feed. This increase in Average Daily Gain (ADG) can have many beneficial aspects for the producer and environment alike. And what about implant effects on the meat you ask? Good question. There is a slight increase in the estrogenic activity from beef of a non-implanted vs. implanted steer. The difference was an increase in 2 nanograms per 500 grams. From 5 ng/500g to 7ng/500g. To put that into perspective peanuts have 100,000 ng/500g activity and Tofu has 113,500,000 ng/500g. Also consider the average adult male produces 136,000 ng estrogen a day. As you can see the slight increase in nominal compared to many other foods we eat. 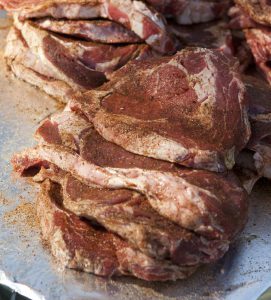 All in all I hope you are able to see that there is no “hormone free” meat, and that “no hormones added” is just an attempt to part you with more of your hard earned money. For more information on special meat marketing claims check out :http://edis.ifas.ufl.edu/an191 and https://www.drovers.com/article/facts-about-hormones-and-beef

← Know Your Grains
Five a Day Your Way →