Screens are everywhere and most daily activities involve using a screen of one type or another. To that end, children are no exception. Many children use screens in school, on the way to school, after school and on the way from school. This excess exposure leads to the question of whether or not the use of screens is getting out of control. Let’s pause for a moment and consider the definition of screen time. Screen time is the amount of time spent using devices with screens such as tablets, computers, smartphones, E readers, game consoles and televisions.

The Center for Disease Control and Prevention (CDC) reports the following statistics regarding children and screen time. 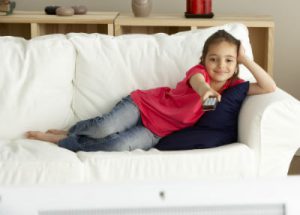 On average, children spend approximately 114 days every year watching a screen for the sole purpose of entertainment (CDC 2018). The American Academy of Pediatrics (AAP), an organization committed to the well-being of children, recommends the following regarding screen time. Children that are younger than 18 months should avoid screens. Parents of children 18 to 24 months of age who want to introduce digital media should choose high-quality programming and watch it with their children to help them understand what they are seeing. For children ages 2 to 5 years, limit screen time to 1 hour per day of high-quality programs. For children ages 6 and older, place limits on screen time, and the types of media, and ensure that it does not take the place of sleep, physical activity and other behaviors essential to health (American Academy of Pediatrics 2016).

I am a Family and Consumer Science Extension Agent for Orange County. I teach classes that focus on chronic disease prevention, by using holistic approaches that incorporate the importance of physical activity and nutrition.