Ouch! Watch Out for the Venomous Puss Caterpillar

The southern flannel moth is an attractive small moth that is best-known because of its larva, the puss caterpillar, which is one of the most venomous caterpillars in the United States. The puss caterpillar is stout-bodied, approximately 2.5cm long, and completely covered with gray or pale brown hairs. They are often mistaken as safe to handle due to their soft furry appearance. There are two generations per year, one in spring and the other in fall. In central Florida, puss caterpillars are most common on various species of oaks but are also common on elms. 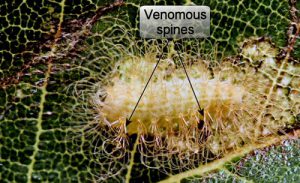 The venomous spines of puss caterpillars are hollow and each is equipped with a venom gland at its base. The toxicity of the stings increases with increasing size of the larvae. Some individuals react more severely to stings than others, and the severity of the sting varies with the thickness of the skin where the sting occurs. The sting produces an immediate intense burning pain followed the appearance of a red grid-like pattern on the skin that matches the pattern of the venomous spines on the caterpillar. Symptoms from the sting of a puss caterpillar can vary in severity and may include headache, nausea, fever, and seizures. Medical attention is advised if symptoms continue to worsen.

Remedies that may be helpful in some cases include removing broken spine tips from the skin with tape, applying ice packs, use of oral antihistamine, application of hydrocortisone cream to the site of the sting and systemic corticosteroids.

More information on the puss caterpillar can be found here: http://edis.ifas.ufl.edu/in976

There are other stinging and venomous caterpillars in Florida. You can find out more about them here: http://edis.ifas.ufl.edu/topic_stinging_and_venomous_caterpillars