There’s a worm in town, but it’s not that fat, happy earthworm that we like to find tilling our gardens. Instead, it’s a flatworm, which kind of looks like a cross between a slug and an small earthworm. It can be identified by its pointy ends and a thin tan stripe down its back. Under a microscope, it has eyes – creepy! – and a mouth on its belly. 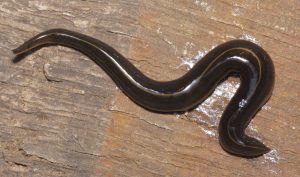 The New Guinea flatworm looks like a stretched out slug or a pointy earthworm. Notice the tan stripe down its back. 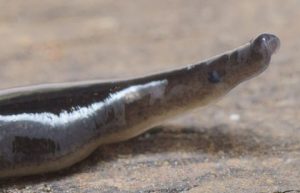 The New Guinea flatworm originally came from – you guessed it, New Guinea. But they like potted plants and have stowed away on shipments to other countries. They’ve been making themselves at home Hawaii for a while, and are now being found in South and Central Florida. Alert homeowners have brought them to the Orange County Plant Clinic for identification, so we know they’re here.

The flatworms are a serious pest to our native snails and slugs. Birds don’t like them – they taste nasty. Other than the ecological implications, humans normally wouldn’t care much about these worms. They don’t hurt us… directly. Unfortunately, they can be a host to a microscopic parasite that does cause disease. While these parasites have not been found in Florida, good sanitary practices are always the way to go in the garden.

The parasite is called Angiostrongylus cantonensis or rat lungworm, and as its name implies, rats are also a part of the parasite’s life cycle. If a rat has lungworm, it can pass the larvae in its feces. If a New Guinea flatworm eats the larvae (apparently they are have an indiscrimatory palate), then the flatworm is infected. Freshwater shrimp, land crabs, and frogs may also be infected. All known cases of infection in humans have been from eating uncooked or undercooked snails or slugs, sometimes inadvertently on leafy greens. For that reason, if you have slugs or rats in your vegetable garden (and it’s hard not to!) always wash produce well before consuming. Wear gloves in the garden and wash your hands. It’s also possible humans could get it from eating an undercooked rat so… don’t.

Despite the hype in the news and on social media, currently the New Guinea Flatworm is more of a threat to our native snails than to humans. The only United States-based cases of infection from the parasite it may carry have been a double handful in Hawaii, and one in New Orleans in a boy that swallowed a raw snail on a dare. He recovered – most people who are infected don’t need treatment. For more information, check out this info from the CDC https://www.cdc.gov/parasites/angiostrongylus/gen_info/faqs.html. 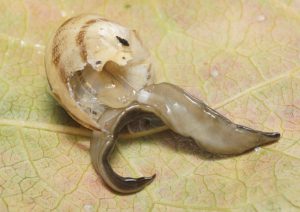 Flatworm consuming a snail. Currently, flatworms are more of a threat to snails than people.

The Florida Fish and Wildlife Commission is keeping tabs on the spread of the New Guinea Flatworm. If you find one, report it at 888-IVE-GOT1 (press 3 for flatworms). Then use boiling water or your garden clogs to kill it. And if you have the urge to dial 911 when seeing one, check out Snopes’ debunking of the social media hysteria here. https://www.snopes.com/fact-check/call-police-new-guinea-flatworm/. Keep calm and garden on!