Mushrooms Are Popping Up Everywhere

When the rainy season begins, mushrooms begin to pop up all over the landscape due to the fact that mushrooms thrive on moisture. Mushrooms are the fruiting bodies of a fungus. Some indicate a disease to plants and others do not. One mushroom that is frequently found in turf is the fairy ring mushroom. Fairy rings and mushrooms are most commonly observed during the rainy summer months. Fairy rings occur when large quantities of organic matter, such as tree stumps and roots, are buried underground. The fungi are nourished and develop on this material. The mushrooms, which can be all sizes and shapes, are the fruiting stages of these fungi. Fairy ring symptoms in the turf can range from a ring of dead grass to a band of dark green turf, with or without mushrooms present in the band, to only a ring of mushrooms. Keep in mind that some of the fairy ring mushrooms are poisonous. 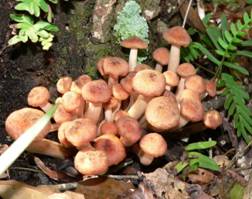 Another common mushroom that might be seen is the fruiting body of the mushroom root rot fungus. Mushroom root rot is caused by the fungus Armillaria tabescens . The fungus gets inside a plant and prevents it from properly absorbing water. The first thing you’ll notice is a decline in a plant’s health. Unfortunately, by the time you see this decline, the disease is already in the plant. Next, you might see clusters of yellow to honey-colored mushrooms; these are the Armillaria fungi fruiting bodies. Armillaria can infect a wide range of trees like oaks and hickories, as well as many hardwoods and conifers. The fungus infects the roots of trees and shrubs causing them to decay, weaken and even die. Most of the time in Florida, Armillaria is a secondary condition that will affect an already-stressed tree, so the best way to prevent infection is to keep your trees and shrubs healthy. Since symptoms of Armillaria root rot generally don’t appear until the tree has already been infected (it can take as long as one to three years), it is generally impossible to save the plant. In this case, you should remove the infected plant, including the roots.

Another common mushroom in the landscape is the stinkhorn. All stinkhorns produce foul odors, which some people 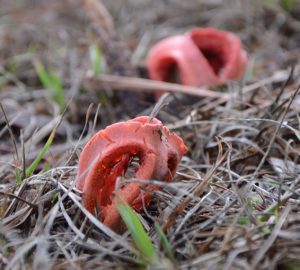 describe as a putrid, rotting meat smell. Stinkhorns can be stalk-like, globular, or latticed and can vary in color but are usually pink to orange in Florida. As a fungus, stinkhorns break down organic matter in the soil like mulch and make the nutrients available for plants.

Most mushrooms will cause no harm to the landscape. When they pop up, they can be left alone, removed by hand, or mowed. If you remove them, there may be fewer mushrooms in the future. It’s not a good idea to eat any mushrooms that are found in the landscape or in the woods. Many poisonous mushrooms look nearly identical to harmless ones.

If you are interested in mushroom identification, the University of Florida has a book titled Common Florida Mushrooms. This book describes 268 species of mushrooms found in Florida’s mild, subtropical climate. The book has lots of color photos and a section on cooking with mushrooms. It is available here for $19.95.