Azalea Flowers…Were They Gone Too Soon?

Most azalea flowers put on a spectacular show this year. Some displays were short lived and the flowers seemed to wilt prematurely and hang onto the plant looking droopy and unsightly. When the flowers were examined more closely, some had water soaked spots on the petals before turning completely brown. The cause? Ovulinia petal blight or Ovulinia azalea. 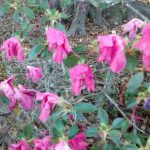 The pathogen over-seasons as sclerotia in diseased flowers on the plants or lying on the soil surface. About the same time as azaleas flower, the sclerotia germinate and produce spores, which are the primary source of new infections. Spore germination is optimum at 64 degrees F with periods of heavy mist or dew.

If the disease was severe this year, remove plant litter and use mulch to inhibit germination of sclerotia to prevent the disease in next year’s bloom. Use of fungicides may not be practical, but reduction in disease severity can be achieved with recommended fungicide applications one month before blooms, especially if the weather is cool and moist.