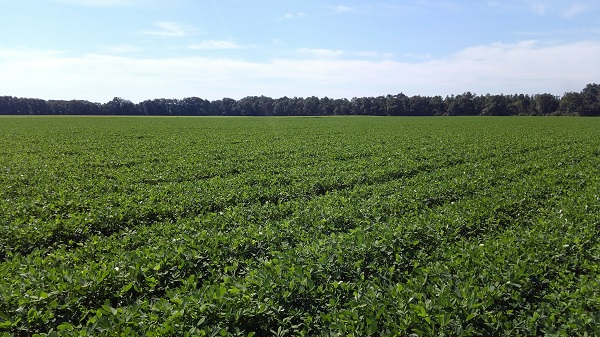 Diagnosing the Cause of Yellowing Peanut Fields

It happens every year. You cruise peanut fields and see spots of yellowing in a field.  The million dollar question is, “What is causing this yellowing?”  Unfortunately, there are many answers to this question. Problems that cause yellowing in peanuts can Include: The first field had slight yellowing and was pretty uniform across the field. Boron and Manganese had just been applied to the field because it is customary to apply these two micronutrients to fields in our area.  Plant tissue tests revealed low levels of phosphorus and magnesium, and high levels of boron and manganese.  Low magnesium levels can cause yellowing.  A soil sample was not performed as this field greened up without any further issues after addition of magnesium. The second field also was yellowing, but there were areas that were worse than others. One area had telltale zinc toxicity issues with stem splitting.  This area was near a pecan tree.  It is common to see zinc toxicity near pecan trees since pecan trees are routinely fertilized with zinc.  A plant tissue test and soil test were performed in another problem area of the field.  The soil test results revealed toxic levels of zinc and manganese, and low pH.  The pH level kept the manganese from affecting the plant, but it was not high enough to protect the plant from zinc toxicity.  Management for this portion of the field in the future should include liming the field to raise the pH to at least 5.9 to protect the peanut plants from zinc toxicity.

For more information on peanut nutrient management, use the following links: