Nearly 100 nature lovers flocked to the DeLuca Preserve to scout the property for animals and plants that live on the expanse. Visitors documented 1,600 sightings, and within those, observed 345 species.

The “BioBlitz,” as it’s called, acts as a survey to help understand the wide variety of species on the property. People from several agencies, including UF/IFAS identified plants — including invasive and native species — across habitats on the property. This includes semi-improved and improved pastures, wetlands and forested wetlands, wet and dry prairies and upland scrub habitats.

“Prior to the blitz, we made lots of assumptions as to what lives on the property, based on the different habitats,” said Brent Sellers, UF/IFAS agronomy professor and one of the event organizers. “We knew endangered and invasive species were on the preserve, but the event provided some data to show what’s really there. There’s no way we can inventory everything, but having people on the preserve that know the habitats well gave us a great deal of information.”

The preserve spans 27,000 acres and is one of the last natural areas of its kind in Florida. The land provides a critical nature corridor between the Kissimmee Prairie Preserve State Park and the Three Lakes Wildlife Management Area and is a conservation focal area for the Everglades Headwaters National Wildlife Refuge and Conservation Area. Scientists and Extension specialists expected to find plenty of biodiversity at this type of land, but they had not yet been confirmed their hypothesis with data. 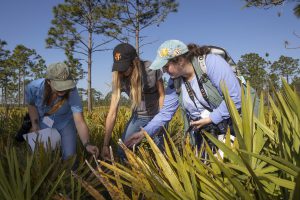 “We weren’t surprised by the biodiversity, but we’re really excited about it,” said Sellers. “We do have some invasive species of concern, but management on the preserve has been fairly successful at keeping a pristine habitat, and having awareness of the invasive species on the property helps us make management decisions. Not perfect by any means, but it’s doing well, and the observations confirmed that.”

The event attracted people from local landowners and ranchers to a variety of agencies and organizations including the Archbold Biological Station, UF/IFAS Extension offices and research centers, Ducks Unlimited, U.S. Fish and Wildlife Service and the Avon Park Air Force Range.

Buck MacLaughlin, range operations officer for the Avon Park Air Force Range, attended the BioBlitz, excited for an opportunity to “meet the neighbors.” The nearby range works alongside surrounding areas, including the DeLuca Preserve, to ensure their training operations are compatible with, and support, conservation and natural areas.

“I was thrilled to be able to participate in the blitz, get out there on the ground for the first time and be a part of supporting the preserve,” he said.

The preserve itself sits under a low-altitude, special use airspace military operating area, used for low-altitude air operations including navigation and maneuvering.

“We want to be the best neighbor we can be,” said MacLaughlin. “We meet requirements to protect the land, and there’s more synergy between us and natural areas like the DeLuca Preserve than many realize. We’re committed to supporting the environment just like you all are and we’re excited this land is here.”

“We have been blown away by participants’ enthusiasm to get out on the property and help with this BioBlitz,” said Shirley Baker, UF/IFAS professor and associate Extension program leader for natural resources, who also organized the event. “We’ve already been asked when people could come out and do this again, maybe in the fall when plants are flowering.”

In the future, UF/IFAS hopes to incorporate youth for a blitz. Another goal is to host these surveying events at different times of year when certain plants may be easier to find and identify to get an even broader understanding of the diversity on the preserve.

“This event provided a glimpse of data that could be collected for research, teaching and Extension projects to come,” said Sellers. “It might even provide basic information for additional research funding as well, there are a lot of possibilities.”

The full results of the BioBlitz can be viewed on the DeLuca Preserve BioBlitz iNaturalist log. Those who could not attend the event but have a knack for identifying plants are encouraged to visit the iNaturalist site and help identify any plants reported but not yet categorized.

Florida forestry keeps the toilet paper rolling
From yellowed broccoli to mushy avocados: How UF scientists are using AI to cut food waste, loss
Give the gift of knowledge this year: Shop the UF/IFAS Extension Bookstore
July 4th feature: UF researcher is a new U.S. citizen; learn about his work in sustainability