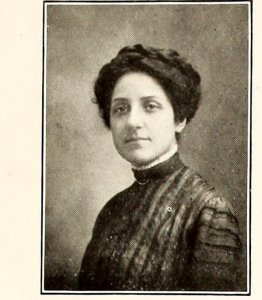 Agnes Harris may not have known it at the time, but when she taught tomato canning classes – and eventually tomato clubs in public schools — they would evolve into home economics classes and a UF/IFAS Extension program.

The same could be said for Harris’ corn clubs. They morphed into what we now know as Florida 4-H programs.

Here’s how it all started.

More than a century ago, Harris worked as head of the department of home economics at Florida State College for Women, now Florida State University. In 1908, Harris began teaching courses in people’s homes, showing women how to promote the health and economic benefits of canning fruits and vegetables.

At the time, home canning was a fairly new practice, and it let rural families extend the shelf life and nutritional value of their harvests. It also gave them a greater stake in marketing and distributing their produce.

In 1912, Harris left the Florida State College for Women to become the first home demonstration agent for the state of Florida and began starting tomato clubs for girls in 11 counties in Florida. The idea was to provide seeds for a crop that was easy to grow and to teach young people how to plant, grow and sell for profit any tomatoes they could not eat.

Extension home demonstration continued to expand throughout the century. It finally led to the establishment of the department of extension home economics, which would eventually morph into what we know today as the UF/IFAS department of family, youth and community sciences.

From 1903 to 1908, Harris taught home economics in Georgia, and during her summers, she took classes at Columbia University. She earned bachelor’s degree from Columbia in 1910 and in 1922, a master’s degree.

In 1919, Harris left Florida to become the director of the Home Economics program in Texas. After a year, she moved to Washington, D.C. and worked as a field agent for the U.S. Department of Agriculture.

Harris died in Tuscaloosa, Alabama, in 1952, leaving a lasting legacy of canning, home economics and what you could argue was the beginning of Extension in Florida.