Memories in the fabric

Sylvia Starnes was a dedicated UF/IFAS Extension Sumter County Master Gardener Volunteer for 18 years. Sylvia passed away from Lewy body dementia in 2017 and recently, David, her husband of more than 53 years asked a simple request – replace a shirt that represented decades of memories of his beloved wife.

David and Sylvia met in 1964 and felt an instant connection. One so strong, that they married only three weeks later.

“Like Spock in Star Trek, we had a mind meld,” he said. “It was clear to me that I couldn’t let her get away. Apparently, she felt the same way.”

Sylvia, a nurse by trade, always had a passion for farming and tending to the land. In 1971, the couple moved to Minnesota and bought a 30-acre abandoned farm. In the early years of living there, Sylvia tirelessly worked to make it a home for their family which at this point had grown by two small children.

“On the farm, gardening was a really large part of our life,” he said. “It provided everything for us except for staples like sugar and flour. We even produced our own meat.”

The whole family was involved in harvesting the garden, including the sweet corn as it was produced and canned.

“We had horses and they knew when the sweet corn was being processed, they’d come across that valley like thunder,” he said. “We also had raised gardens for strawberries and the chipmunks knew when the strawberries were perfect. They would eat so many that they would stain their faces red. So many wonderful memories to look back on and gardening made up many of them.”

After living on the farm for 25 years, David and Sylvia sold it to their son and moved to a cabin on the Mississippi River. Ultimately, they became snowbirds who spent their winters in Florida and later became permanent Sumter County residents in 1997.

While David was busy with engineering projects, Sylvia stayed equally busy. She was on the county library board, an officer for the local humane society and a member of the native plant society in addition to being an active UF/IFAS Extension Master Gardener Volunteer.

David and Sylvia enjoyed their time volunteering with the UF/IFAS Extension Master Gardener program and working in their home garden.

“Sylvia loved gardening because it allowed her to revisit and reinforce her childhood experiences with her family, and apply her considerable knowledge of the life sciences,” he said. “She created several diverse gardening plots. Each had a particular purpose and environment. Some were for flowering and others were for edibles. She also tried to propagate plants that served several purposes like ground covers for erosion and weed control.”

“I loved our gardening experiences together because it met both of our needs and allowed our whole family and friends to participate in the work and its bounty,” Starnes said.

The shirt David often wore while gardening with Sylvia was worn and in need of replacement. As a special request, the UF/IFAS Extension Bookstore team 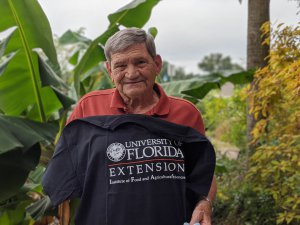 recreated the shirt for Mr. Starnes, a symbol of many hours the couple spent gardening together.

“That shirt provided a symbol of her special relationship with UF/IFAS Extension and its personnel,” he said. “Too, it reminds me of the tours she gave on our small acreage where she explained and answered questions about the interdependence of each plant with its neighbors. My favorite part was the ‘porch party’ that followed.”

David describes Sylvia as someone who got them through many trials, time and time again.

“The things we accomplished could never have come to pass without Sylvia’s extraordinary talents and her love,” he said.

While Sylvia may be gone, her spirit lives on in David and the many hearts she touched with her passion for tending to the land.