For the second time this decade, a new graduate of the University of Florida Institute of Food and Agricultural Sciences has won the E. Lucy Braun Award for Excellence in Ecology from the Ecological Society of America (ESA), honoring the best student research poster at the most recent ESA annual meeting. 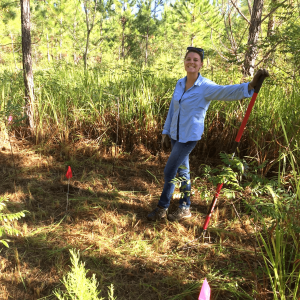 Jules NeSmith, who earned her master’s degree from the UF/IFAS School of Natural Resources and Environment in December, attended the ESA annual meeting in August 2016. There, she presented a poster summarizing her experiments on the impacts of drought and invasive plants on survival of pine tree seedlings. Afterward, a judging committee deemed her poster the event’s most impressive.

“It was a huge surprise to find out I’d won,” said NeSmith, who was notified in April. “I entered (the poster competition) hoping to be
competitive, but there are a lot of great ecologists showing projects at ESA.”

NeSmith said her experiments didn’t turn out as expected. It’s commonly accepted that drought or competition from invasive plants can each reduce pine seedling survival, so NeSmith had assumed that when both stressors were combined they would pose an even more serious challenge to seedlings. Instead, experiments conducted in Alachua and Marion counties showed little synergistic effect between drought and competition.

“So the two stressors don’t necessarily exacerbate each other, which was very interesting to me,” said NeSmith, who earned her master of science working with invasive plant expert Luke Flory, an associate professor with the UF/IFAS agronomy department.

Now that NeSmith has earned her degree, she is writing papers based on her research and simultaneously searching for a full-time job. She hopes to secure a position where she can educate the public about science and raise environmental awareness.

The Braun award will be formally presented to NeSmith at the next ESA annual meeting, Aug. 6-11 in Portland, Ore.

In 2012, another UF/IFAS student won the Braun award – Ernane H.M. Vieira Neto, a graduate student in the UF/IFAS Department of Wildlife Ecology and Conservation.

ESA is the nation’s largest organization for professional ecologists. The Braun award has been presented since 1988, honoring the memory of E. Lucy Braun (1889-1971), an eminent plant ecologist and first woman to serve as ESA president.

Jules NeSmith removes invasive cogongrass from a wooded area near Archer, Florida in October 2014, as part of a research study she conducted while earning a master of science degree with the University of Florida Institute of Food and Agricultural Sciences. NeSmith investigated how drought and competition by an invasive species interact to affect the performance and survival of native pine tree seedlings. In April 2017, Nesmith’s work earned her the Ecological Society of America’s E. Lucy Braun Award, which recognizes the best student research poster presented at the ESA annual meeting. Photo by Luke Flory.

Tom is the special projects writer for UF/IFAS Communications. He enjoys learning about Florida's history, agricultural industries and natural wonders.