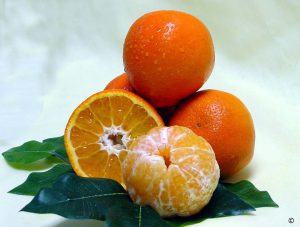 GAINESVILLE, Fla. — Sugar Belle — a bold mandarin orange hybrid that ripens in time for the winter holiday market — will be the first University of Florida-created citrus variety intended for commercial production.

The new sweet-tart fruit may be best described as a mandarin with a tangy punch.

“Many old-timers in citrus have said this is the best-tasting citrus they’ve ever had,” Gmitter said.

The fruit, which has a patent pending and is also known as LB8-9, has been in the works since 1985.

Mark McLellan, IFAS’ dean for research, said he believes the time that went into breeding this variety will be worthwhile.

“Sugar Belle is positioned in a unique market window, and its flavor characteristics are expected to make this variety a consumer favorite,” he said. “We’re very excited to offer it on behalf of the university.”

The corporation was granted the exclusive license for the fruit through the university’s Invitation to Negotiate process, designed to benefit everyone from IFAS to citrus growers.

“It’s becoming more common for grower-backed organizations to help monitor the markets for growers and ensure that everyone has a chance to be successful,” said John Beuttenmuller, the intellectual property and licensing director for Florida Foundation Seed Producers, which led the ITN process.

In that process, a company is selected to deliver new cultivars to the public. In return, the company pays royalties back to the Florida Foundation Seed Producers and the Florida Agricultural Experiment Station, to be reinvested in breeding and development programs.

Sugar Belle is a unique variety, said the corporation’s executive director, Peter Chaires. He believes it will make a big splash in the $52 million specialty citrus market.

Chaires describes its flavor almost like one would describe a fine wine.

“It has a flavor that takes it to the top of the show wherever it goes. It’s got a very, very deep flavor,” he said. “I don’t want to say it’s rich, but it’s a very deep, complex flavor.”

Despite strong ties to the citrus industry, UF has never before released a citrus cultivar developed solely by its scientists-likely because citrus breeding is an excruciatingly slow endeavor. The average time for new citrus-from creation to its commercial release-can be up to 20 years.

And in this case, what became the UF’s inaugural citrus variety could just as easily have been plowed under.

Gmitter, who arrived at UF’s Citrus Research and Education Center in Lake Alfred as an assistant professor in 1985, was a young plant breeder desperate for citrus trees to work with. After locating a small tract of trees left by a retired professor, Gmitter went for a look.

“I went out in early November of my first year … This one tree had beautiful, bright orange fruit. The best citrus I’d ever eaten in my life,” Gmitter said. Those trees were used to create his new cultivar.

UF officials hope Sugar Belle will be as lucky when it comes to reaching consumers-which could be as early as this year, in some markets.

The fruit matures early, so it should be a good fit for the December holiday market, Chaires said. It can be grown in a manner to produce low-seeded fruit. And with his organization keeping tabs on how the fruit fares in groves and the economics of the citrus market, he believes the new fruit has the potential to be a big hit.

“Every time we’ve tested it with different groups, it’s been wildly popular,” he said.Contacts: