Cedar Key Seabird Rescue was founded in August 2016 by the Cedar Keys Audubon with support from several organizations, including the UF/IFAS Nature Coast Biological Station, Florida Sea Grant, Florida Fish and Wildlife Conservation Commission (FWC), and Audubon Florida. This group of intrepid volunteers formed in response to the high number of bird entanglements in Cedar Key, an area identified as a bird entanglement hotspot by FWC and a regional UF survey. While volunteers respond to all kinds of injured birds, the focus of the program is to address seabird entanglement and injury caused by interactions with fishing tackle and fish carcasses.

In 2019, seabird rescue volunteers responded to 57 calls regarding more than 24 species of birds. The top three bird types were seabirds: brown pelicans, cormorants, and gulls. The leading type of injury was entanglement in fishing line, with 20 such cases in 2019. The majority of birds rescued (22) were taken to a rehabilitation facility, either in Homosassa or Gainesville. The next most common outcome was for the bird to be immediately released after receiving rescue assistance (12). Overall, the rescue efforts resulted in 18 confirmed successful releases. In 2019, there was at least a 32% success rate for rescues, which is about the level we expect based on previous years. The summary tables below detail information summarized from rescue reports received in 2019.

Table 1. Summary of the species of birds with injuries reported in 2019. 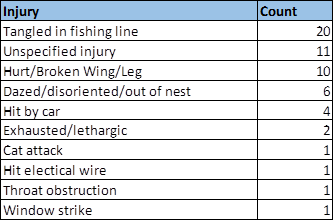 Table 2. Summary of the types of injuries suffered by birds in Cedar Key. 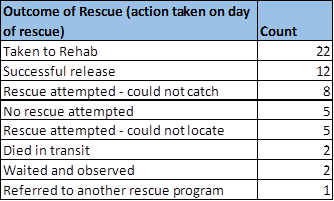 Since formation of the rescue group, there is evidence that bird entanglement incidents are declining locally. This could be due to several factors but is likely at least in part due to the signage and other educational efforts that are part of Cedar Key Seabird Rescue. In Aug-Dec 2016, there were 21 rescue events and 38% of these calls were for entangled pelicans. Over the same period in 2017, the program also received 21 calls but only 28% of them related to an entangled pelican. Comparing 2017-2019 data, there were 49 reports of entangled birds in 2017 but only 16 such reports in 2018 and only 14 entangled pelican reports in 2019. This represents a 71% decline in reports of pelican entanglements in the Cedar Key community from 2017 to 2019. We hope that over time the downward trend in pelican entanglements continues.

Since 2016, volunteers have contributed 730 hours and driven over 12,000 miles all in the name of rescuing local birds. The volunteers are called upon by tourists, pier anglers, residents, and even the City of Cedar Key police department. The Cedar Key Seabird Rescue initiative is an important part of sustainable fishing in Cedar Key. Check out the gallery below of our wonderful volunteers in action! 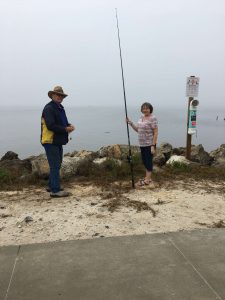 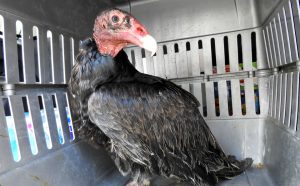 A turkey vulture on its way to be released after rehabilitation. 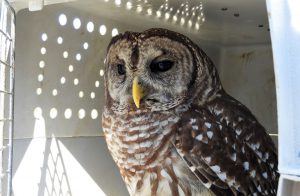 A barred owl on its way to be released after being rehabilitated. 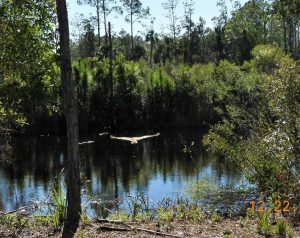 A barred owl takes flight after a trip to rehab. 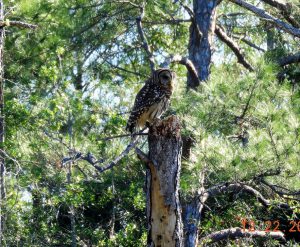 A barred owl perches on a tree after being returned to the wild. 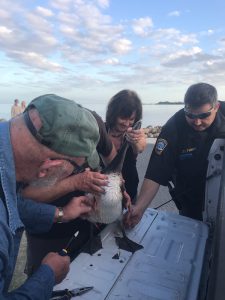 Volunteers and bystanders work together to disentangle a brown pelican in distress. 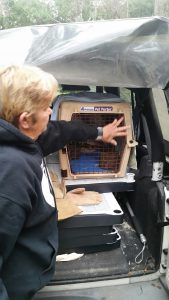 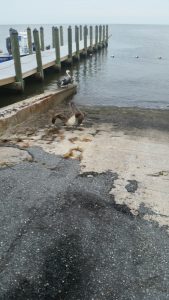 A rehabilitated juvenile brown pelican flapping its wings before flying away. 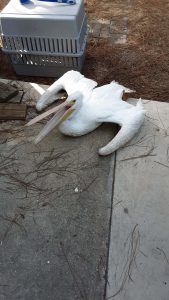 An American white pelican on the way to a rehabilitation facility.