Water Relations of an Insular Population of Florida Cottonmouth Snakes 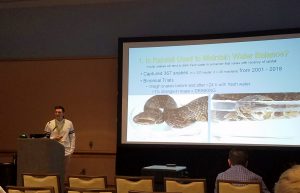 Written by Mark Sandfoss with the UF Department of Biology

Seahorse Key (SHK) is a continental island near coastal Florida that lacks permanent sources of fresh water and is inhabited by a large population of Florida Cottonmouth snakes, Agkistrodon conanti. Because cottonmouths on the mainland are strongly associated with freshwater habitats, conspecifics on SHK likely have developed alternative strategies for maintaining water balance. We used a mix of field and laboratory experiments to investigate the possible stresses and adaptations related to dehydration within the cottonmouth population on SHK. Our objectives were to 1) measure the hydration status of free-ranging snakes on SHK in relation to rainfall patterns, 2) compare the drinking threshold of cottonmouths from island and mainland populations and 3) compare seawater (SW) drinking behavior of island and mainland snakes when in a dehydrated state.

Cottonmouths on SHK are using rainfall to maintain water balance, and that SHK and mainland snakes would differ in their dehydration tolerance and seawater drinking behavior. Our results show 1) cottonmouths captured on SHK were more likely to be in a dehydrated state as time increased since last rainfall, 2) snakes from SHK and mainland populations showed no difference in drinking threshold and 3) cottonmouths from island populations avoided drinking high salinity water (>15% SW) while mainland snakes showed no preference. Overall, these results support the hypothesis that populations of cottonmouths inhabiting islands have developed behavioral and physiological adaptations to survive within this novel habitat.

Read more about the Snakes on Seahorse Key >>