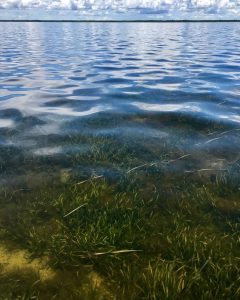 Most of my summer interning at the Nature Coast Biological Station, I got to spend working on a project funded by the NOAA RESTORE Program, which is a gulf-wide assessment of habitat use and habitat-specific production estimates of nekton in turtlegrass. Because it is a gulf-wide project, multiple institutions were involved running it at different sites. My host, Dr. Charlie Martin from the University of Florida is in charge of two sites, one in Apalachicola and the other in Cedar Key. The Cedar Key site includes the area near NCBS and up the coast in Steinhatchee. The other institutions involved are the Florida Fish and Wildlife Conservation Commission, Texas A&M, and the University of Southern Mississippi. The sites where the latter institutions are running the experiment are in Florida Bay, the Texas Coastal Bend, Lower Laguna Madre, and the Chandeleur Islands. 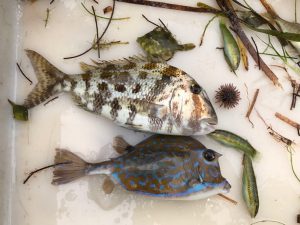 The first stage of this project involved quantifying the nekton habitat use of turtlegrass. To do this, my lab team searched for areas in our designated sites that had over 50% cover of turtlegrass and then trawled to gather the nekton. We identified the different species we found and counted, measured and weighed them to gather data about their abundance, age-class, and biomass. Then we needed to gather data about the seagrass beds themselves in order to establish a relationship between the nekton and the turtlegrass structural complexity. To do this we surveyed the grass at each of the 30 trawl stations at our two sites. This involved taking cores of the seagrass at the beginning, middle, and end of the trawl paths, then we used 1m x 1m quadrats to determine the percentage cover of each species of grass found, along with their density and canopy height. 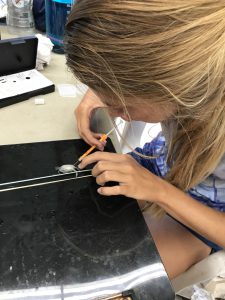 The second stage of this project involved doing a blue crab growth and mortality experiment to support the information we gathered in the first stage. To do this we collected hundreds of juvenile blue crabs to use in the experiments. We built cages with open bottoms to place in the seagrass beds and put out 30 of them across Apalachicola, Steinhatchee, and Cedar Key. We tagged and measured the crabs and put eight of them in each cage. After staying in the cages for a month we gathered them and remeasured them to look at the growth rates in the different areas. 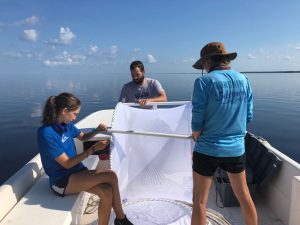 All of this data gathered by my team will be put together with the data from the other sites in the Gulf of Mexico and will give us an understanding of the use and production of turtlegrass beds all across the gulf. It was great to be able to participate in such a large collaborative project. I enjoyed working with my lab team and am grateful for Dr. Martin and all of NCBS for giving me this opportunity. I’m lucky enough to continue working for Dr. Martin on this project, others, and even a personal project I will be starting in the fall.