Skip Navigation or Skip to Content
Home » UF/IFAS Extension Nassau County » What Can You Tell Me About Porterweed. VR

What can you tell me about porterweed. VR 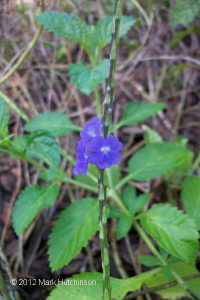 Thank you for your photograph as this made it easier to identify. I believe your plant is called blue porterweed, but I cannot tell if it is the native one Stachytarpheta jamaicensis or the Asia one called Stachytarpheta urticifolia.

Local garden centers will often sell the Asian blue porterweed, but you can find the native one more often from native plant growers. Blue porterweed is a small perennial shrub which during its first year of growth becomes woody toward the base of the stem. These plants grow wider rather than tall with typical heights of 4 feet with 6 feet widths. The tall stems bearing flowers droop and touch the ground. Blue or pink flowers are borne terminally on long, stringy spikes at the ends of the stems. The flowers attract pollinators such as butterflies and native bees to the landscape. Rich, dark green foliage displayed on square, green stems makes porterweed a nice addition to any sunny landscape.

The identification between native and hybrids is tricky and our expert at UF states the following: “… the best character for identifying S. jamaicensis to be not size, but the fact that it branches near the base (just above the ground). So, there is a very short stem extending above ground level, and then multiple stems curving outward and upward (most of the other species branch further above ground or just have multiple stems emerging directly from the ground). Also, it has a relatively narrow flower spike and smaller flowers, especially when compared to the hybrids. By the way, regarding the nativity of S. jamaicensis, the consensus seems to be that it was probably native to the southernmost part of the Florida peninsula—Monroe, Miami-Dade, Collier, and Lee counties. In Florida, it is now cultivated and naturalized far outside of its likely original native range…” https://edis.ifas.ufl.edu/fp559