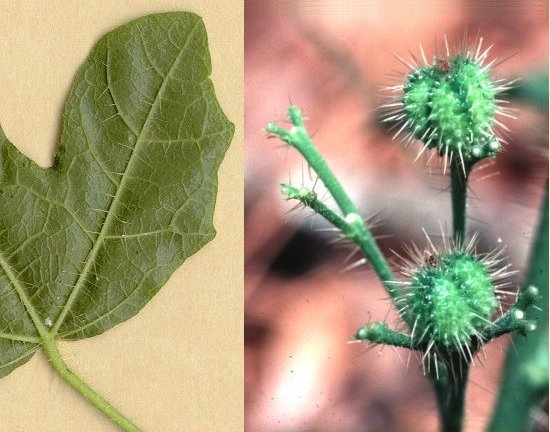 What can you tell me about the weed Bull nettle? Thanks for bringing in a sample of the plant in a bag so I could better identify it. The Bull nettle, Cnidoscolus stimulosus, is also known as tread-softly, finger-rot, or spurge-nettle.  You have already experienced their stinging quality.  Irritant compounds cause intense stinging and itching will fill the long, stiff, hollow hairs on the stem, leaves, flowers, and fruits. Often a rash (or tiny red bumps) appear after the burning sensation wears off (usually less than 30 minutes). In sensitive individuals, the rash or dull purplish discoloration may persist for several days. Bull nettles are a major weed in the sandy soils. If reactions persist, please consult your physician.

Bull nettles are native to Florida and found throughout most of the state. Bull nettles are perennial plants, able to withstand drought and poor soil conditions better than most grasses. This is because they have a well-developed, deeper root system making them less prone to moisture deficiencies. Produce of seed is the easiest way they reproduce and these seed which spread to other areas quickly.

For the adventurous outdoor types, the tuber can be eaten if you can avoid getting around the stinging parts of the plant.  Apparently, the root takes like a potato, however, I sincerely believe if you put butter on anything – I am liable to eat it.

Check out the University of Florida publication on the Bull nettle for more information.