Air potato (Dioscorea bulbifera) is a vine in the true yam family native to Africa, south Asia, and northern Australia. It was introduced to the United States via the slave trade and reached Florida in 1905. Air potato is an aggressive vine that can quickly engulf the vegetation beneath it and, once established, is extremely difficult to control. It is listed as a Category I noxious weed by the Florida Exotic Pest Plant Council.

Air potato is a twining, herbaceous vine that sprouts from underground or above-ground tubers. Vines can grow quite long, up to 70 feet in length, and twine counterclockwise. Leaves can be up to 8 inches long and are heart-shaped, basally-lobed, and alternately-arranged along the stalks. Aerial tubers form in the leaf axils. Tubers are rounded with a smooth surface and reach up to 5 inches in length. Flowering is rare, and no male flowers or fruits have been observed in Florida. Most new plants sprout from aerial tubers. 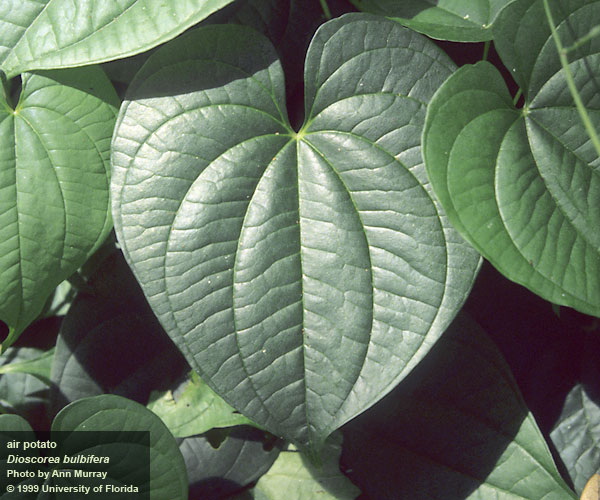 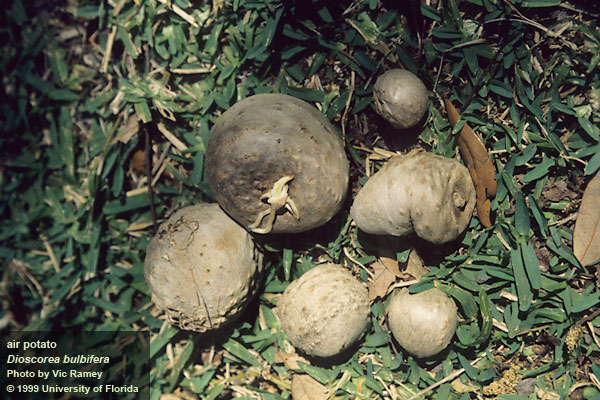 Air potato is found in a variety of habitats, but prefers hardwood forests. It is rarely found along edges of pinelands and avoids marine areas due to salt intolerance.

Dense masses of air potato outcompete native plants and prevent native plant seeds from germinating. Air potato is an aggressive vine that grows quickly and can suffocate the canopy and can drastically reduce light penetration to the forest floor, eliminating the understory. The increase in biomass due to dense masses of air potato also provides a fuel ladder that increases vulnerability of the forest canopy to fire, possibly increasing fire severity and compromising safety of prescribed burns. It’s difficult to control due to spread by aerial tubers.

Mechanical removal combined with herbicide application can be effective. Hand pulling vines can prevent aerial tuber production. As many aerial tubers as possible should be removed from the site; this is best done in the winter when vegetation is not as dense and there is better visibility. Underground tubers can be dug up. All plant material must be disposed of in a way to prevent further spread (for example, in a landfill where it will be incinerated). Air potato cannot tolerate freezing, so putting tubers overnight in a freezer will prevent further infestations after disposal.

Glyphosate or triclopyr-containing herbicides are effective when sprayed onto the foliage. As many leaves as possible should be sprayed, preferably at a time when there is little wind. For best results, spray late in the growing season. Be sure to follow the herbicide label.

If you are removing air potato, be careful not to leave aerial tubers behind and be sure to dispose of plant material in a way that it won’t spread.

Natural Resource & Agriculture Extension Agent at UF/IFAS Nassau County Extension. You can reach me at lkolluri@ufl.edu.