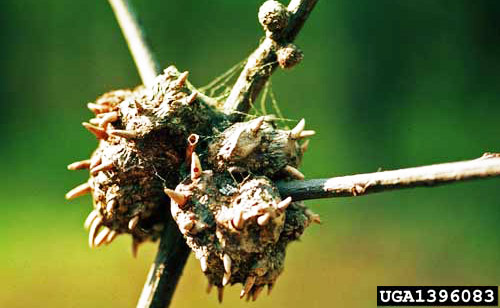 I have growths on the stems of my oak trees. Are these killing my trees? The structures are called galls and are generally caused by insects. Bacteria, fungi, mites or nematodes can cause galls to form as well.

These growths are called galls because they contain large amounts of tannin, which has a very bitter taste. Long ago, they were known as “gallnuts” because they tasted as bitter as gall.

Plant galls are abnormal growths of plant cells formed as a response to the insect’s stimulus caused by egg laying, or larvae or nymphs feeding. In the spring, before the leaves are fully developed, eggs are laid in the leaf or stem. Small holes on the outside of the gall indicate the adult insects have emerged.

Galls are found most commonly on the stems and leaves, but also occur on trunks, flowers, fruit, leaf-shoot terminals, petioles and roots. Each gall-forming insect produces a gall that is characteristic of that particular insect. Some galls may be two inches in diameter, while others are so small they are rarely noticed. They occur in almost every conceivable form and color, and their shapes range from spheres to tubes. The surface may be smooth, hairy or covered with spines.

Although the galls often look unsightly, they will not cause significant damage therefore chemical control is usually not advised.  You might consider doing some light pruning to remove them if they seem excessively unsightly but some galls contain beneficial insects.

← Q: What is biting me when I work in the yard. I cannot see anything.
Q: I found small, black and red weevils in the top of my palm tree. What should I do? →