Skip Navigation or Skip to Content
Home » UF/IFAS Extension Nassau County » Can You Identify These Insects For Me? They Are All Over My Kale And Leafy Vegetables.

Can you identify these insects for me? They are all over my kale and leafy vegetables. 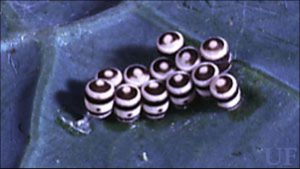 These are some of the easiest insects to identify because of their beautiful coloration. Harlequin Bug, Murgantia histrionica, is an important insect pest of cabbage and similar crops in the southern half of the United States. Harlequin bugs can destroy the entire crop if not managed properly.

This insect is classified as a piercing/sucking insect because it sucks the plant’s vascular tissue fluid. The removal of the fluid from the plant causes it to wilt, turn brown and ultimately die. Plants commonly attacked by the harlequin bug include crucifers such as horseradish, cabbage, cauliflower, collards, mustard, Brussels sprouts, turnip, kohlrabi, and radish. In the absence of these favorite hosts, tomato, potato, eggplant, okra, bean, asparagus, beet, weeds, fruit trees, and field crops may be eaten.

Hand-picking and destroying the insect pests and egg masses may make a difference especially if small numbers of insects are detected. The easiest and most effective control of harlequin bugs is to hand remove them in the fall and spring before they have a chance to lay eggs.

Chemical control can be accomplished by using insecticidal soap (not dish soap) on the young nymphs. Apply insecticidal soaps in early morning, before the bugs are active, to maximize effectiveness. Do not use neonicotinoid insecticides or broad spectrum insecticides as they can harm our important bee populations.

For more complete information check out the University of Florida, EDIS publication: http://edis.ifas.ufl.edu/in152