Skip Navigation or Skip to Content
Home » UF/IFAS Extension Nassau County » What Can You Tell Me About The Cicada Killer?

What can you tell me about the Cicada killer? 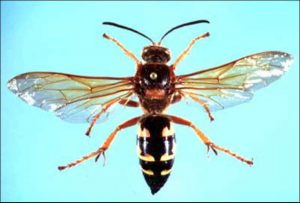 The Giant Cicada killer or giant ground hornet, Sphecious speciosus, is a common Florida species. This insect can grow to almost 2 inches long and easily one of the largest wasps found in Florida. Its striking black and yellow markings let other insects know it should be left alone.

The females of the common Florida species hunt Tibicen spp. cicadas and can dig four-foot burrows in the ground with several branches and cells. Between one and four cicadas are deposited per cell depending on the size of the adult cicada.

One interesting fact: these wasp are strong flyers and have been known to stay in flight for as long as 45 minutes.

Cicada killers are usually considered beneficial insects since they destroy plant-feeding cicadas. Also, they rarely sting except when the females are handled. However, under certain circumstances, such as when elderly persons or young children are present in the breeding areas, one may want to discourage their presence. This can be done by eliminating or reducing the breeding area, which usually consists of exposed, sandy soil. This area can be mulched or covered with grass. Labeled insecticides can be applied to the nesting sites to kill the wasps. For more complete information check out the University of Florida publication titled: “Cicada Killer, Giant Ground Hornet, Sphecius hogardii (Latreille) and Sphecius speciosus (Drury) (Insecta: Hymenoptera: Sphecidae)” http://edis.ifas.ufl.edu/in573