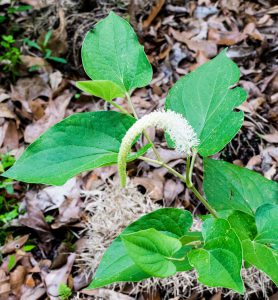 I believe the plant is a perennial called Lizard’s tail, Saururus cernuus. Lizard’s-tail is a common emersed plant. It can be found as far north as Canada and west to Texas and to south Florida.

Lizard’s tail is often found growing in large clumps along the edges of ponds or in wetlands. The erect plant grows to one to two feet tall, in freshwater marshes and swamps nearly throughout Florida. It blooms in the summer but with our very mild winter, you are seeing it bloom now.

Lizard’s-tail has a bottlebrush spike of white flowers. It is typically six to eight inches long but can be longer. The flower spike arches above the leaves of the plant. After maturity, the flowers become a string of nutlets resembling a lizard’s tail.

It can grow in full sun to partial shade and spreads by underground rhizomes.