Can we grow olives in Northeast Florida? 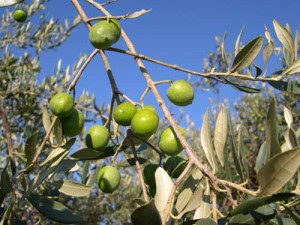 It appears we can. We have two olive tree/shrubs planted in the Fruit Demonstration garden and this year we have a few olives on one of the trees. The fruit turns green in the summer and should ripen and turn black in the fall. The olive originated in the eastern Mediterranean area, and has been cultivated by man since ancient times. Trees are extremely long-lived, up to 1,000 years, and are tolerant of drought, salt and almost total neglect. Olive trees have been reliable producers of food and oil for thousands of years. Earliest references of olive oil use and international trade date to 2000-3000 BC. The olive was spread throughout Mediterranean Europe and North Africa very early, due to its ease of vegetative propagation and cultivation in dry climates. The Romans built on earlier work on olive culture by Greeks, Arabs, and Egyptians, and refined olive oil extraction and improved cultivars used for oil. Today, the industry remains largely confined to Mediterranean countries of Europe, the Middle East, and North Africa, where it began thousands of years ago. The California industry began in the late 1800s as settlers planted orchards from cuttings taken from the original trees planted at Spanish missions. By 1900, there were about ½ million trees being grown in California, largely for olive oil production, but shortly thereafter, pickling and canning procedures were developed for producing black olives, the primary olive product from California today. The trees appear to have no insect or disease issues. Olive might be a good choice to consider as a hedge as long as we consider keeping it at a 6-10 foot height.