Skip Navigation or Skip to Content
Home » UF/IFAS Extension Nassau County » Q: What Kind Of Caterpillar Is This? It Looks Similar To A Monarch Butterfly Caterpillar But I Know It Is Not.

Q: What kind of caterpillar is this? It looks similar to a monarch butterfly caterpillar but I know it is not. 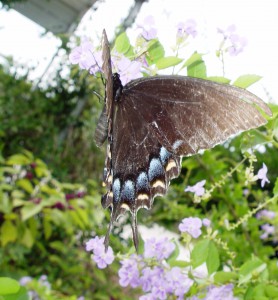 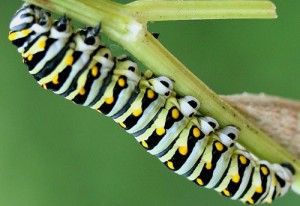 A: Thank you for bringing in the caterpillar on a leafy twig so it has something to eat. The caterpillar is the larval stage of the black swallowtail butterfly. The colors on both caterpillars are white, yellow and black. The monarch caterpillar configuration is more striped while the black swallowtail caterpillar has yellow dots. Both produce beautiful adult butterflies which are important pollinators for our area. Because the larval stage of the black swallowtail does devour some of our ornamental flowering plants, it has been labeled as a pest by a few in the horticulture business – but not this horticulturist! Habitats of the black swallowtail are generally open areas, including both uplands and wet areas—wet prairies, fields, flat-woods, pine savannas, roadsides, weedy areas, and gardens. Males perch and patrol open areas for females—often near patches of a host plant. Eggs are laid singly on the host plants—usually on new foliage and occasionally on flowers. Development time varies depending on temperature and host plant species, but generally the egg stage lasts four to nine days, the larval stage 10–30 days, and the pupal stage nine to 18 days (except for overwintering pupae). Pupae are the overwintering stage. There are two generations in northern parts of the range but at least three generations in the South. All swallowtail larvae have eversible horn-like organs behind the head known as osmeteria. The osmeterium of the black swallowtail is bright yellow-orange. When threatened, larvae rear up, extrude the osmeterium, and attempt to smear the potential predator with a chemical repellent. Black swallowtails feed on sweet fennel, dill, Queen Anne’s lace and hemlocks. For more complete information look over this University of Florida/IFAS publication: http://edis.ifas.ufl.edu/in906