Skip Navigation or Skip to Content
Home » UF/IFAS Extension Nassau County » Q: I Don’t See The Small Green Lizards Here Anymore. I Used To See Them All The Time When I Moved Here Ten Years Ago. They Seem To Have Been Replaced By A Brown Variety. What Happened?

Q: I don’t see the small green lizards here anymore. I used to see them all the time when I moved here ten years ago. They seem to have been replaced by a brown variety. What happened? 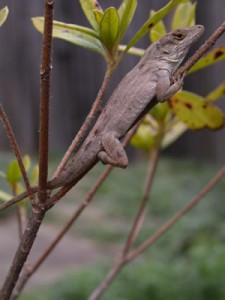 A: Most likely what you are now seeing is the Cuban brown anole, Anolis sagrei. Apparently this lizard was first detected in 1887 in the Florida Keys but has become fully established within the last 10 years. An increase in the population occurred in the early 1940s as it was detected in many areas of South Florida. It became more fully established in urban areas south of Gainesville by 1980. From there it spread to north Florida and the panhandle then extended to Georgia, Louisiana, and Texas either in landscape container plants and/or by cars and trucks. Larger populations of the brown anole began to be seen along major highways at rest areas, campgrounds and hotels in the mid 1990s. Severe cold winters have from time to time reduced their population but this lizard has able to keep a sustainable number of offspring to continue future generations. They are even able to populate islands as they hitch rides on boats or firewood transferred by boaters or campers. This species thrives in disturbed habitats and ornamental plantings but can potentially inhabit almost any inland or coastal habitat in Florida. It is apparently the most abundant anole over much of the southern half of peninsular Florida, and populations now occur in every county in Florida. It often perches low in trees and shrubs but is quite terrestrial, often escaping by running along the ground. Males reach a length of 20 cm (8 in). The body is brown, and males often have bands of yellowish spots, whereas females and juveniles have a light vertebral stripe with dark, scalloped edges. The hanging fold of skin under the neck is called a dewlap. The edge of the dewlap is white and appears as a stripe on the throat when not distended. The dewlap may vary in color from a bright red-orange to pale yellow. They are prolific hunters, similar to the green anoles. It is regrettable the brown anole could not live well with the green anole but this is a common result when an invasive species is introduced and has no local predators to keep it in check.