We are asking for divers and snorkelers to be on the lookout for long-spined sea urchins with and without signs of disease.

The long-spined sea urchin Diadema antillarum is a keystone species on Florida’s Coral Reef.  Long-spined sea urchins are the lawn mowers that clean and scrape algae off the reef.  This in turn helps baby corals settle and grow and prevents adult corals from being overgrown and killed.  I have been told by long-time residents of the Florida Keys that these urchins were once so numerous that you had to use caution to avoid stepping on them and encountering a painful interaction with their spines.  Unfortunately, starting in 1983, a disease of unknown origin decimated populations of long-spined sea urchins in the Caribbean, Bermuda, Bahamas, and South Florida.  Since that time, long-spined sea urchin population have declined by more than 97%.  The importance of this species and their very low population numbers is why the possibility of a new disease outbreak is very concerning.

Since February 2022, there have been reports of rapid, extensive die-offs of long-spined sea urchins in several Caribbean locations including the US Virgin Islands, Jamaica, Mexico, and Dominica.  Unfortunately, Florida has received its first concerning report in Biscayne National Park.  Observations indicate that sick urchins first detach from the substrate (for example, the rocks that they often live on) through loss of control of their tube feet, followed by shedding of their spines and tissue loss.  Right now, we are asking people to report when and where you see long-spined sea urchins with, and without, signs of disease.  Photos are also very useful.  Scientists will then survey these sites and collect samples of the urchins, seawater, and sediments.

How to identify the long-spined sea urchin

There are at least seven species of sea urchins in South Florida.  The long-spined sea urchin is easily identified because the spines are very long relative to their central body, also called the test, compared to the other species.  As you can see in the photo on the top right, the largest species in the center is the long-spined sea urchin, and the spines are considerably longer than the other two species pictured: the rock-boring urchin on the left and the two reef urchins on the right.  These spines are not venomous but they are good advertising to would-be predators to stay away and “do not touch me.”  They are typically a very dark black-purple color, and sometimes white or variegated like the one pictured here.  They are nocturnal, but you can usually find them hiding in crevices during the daytime if you are out at the reef.  I’ve seen them in seagrass beds, too. 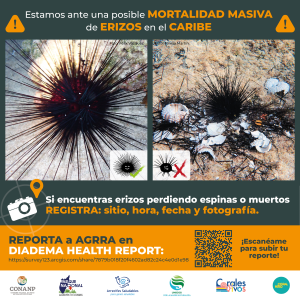 The Florida Department of Environmental Protection (FDEP) has a reporting tool at SEAFAN.net or you can call the hotline 866-770-7335.  The FDEP SEAFAN network reporting tool can also be used to report stony coral tissue loss disease, another lethal disease of unknown origin that has been infecting stony corals since 2014.  In the Caribbean, the Diadema Response Network needs reports of healthy or dying long-spined sea urchins, submit your reports here.  Call Shelly Krueger, Florida Sea Grant agent in the Florida Keys for the University of Florida IFAS Extension, Monroe County at 305-292-4501 to file a report or for more information.