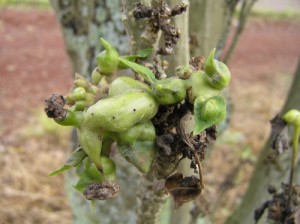 In 2004, a new species of wasp Quadrastichus erythrinae Kimwas identified as the cause of gall formation on several species of Erythrina, known as the coral tree. This tiny pest spread to Hawaii by 2005 and was first found in Florida in 2006.

The female wasps insert their eggs into young leaf and stem tissue. The developing larvae cause the formation of galls – curled and deformed leaves, and short swollen petioles. Eventually the larvae pupate and emerge through exit holes in the plant tissue as adults.

A heavily infested plant may suffer from reduced leaf growth, defoliation, and a decline in health that can lead to its death. 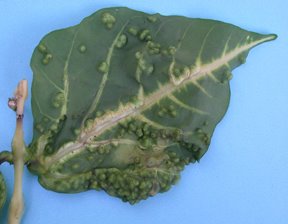 In November 2008, Hawaii’s Department of Agriculture began a biocontrol program to protect its native Erythrina species, the wiliwili tree. After several years of research, they are releasing a natural predator, the small wasp Eurytoma erythinae from Tanzania. The beneficial wasp lays its eggs near the larvae of the gall wasp. The beneficial larvae then feed on the gall wasp larvae.

In Florida, beneficial insects are not yet available for release. Research has shown that an imidacloprid treatment may save larger trees. It also appears that the native species Erythrina herbacea isnota host plant for the gall wasp.

These links were updated in March, 2013.