Oleander, Gumbo Limbos & Buttonwoods are they galling you? 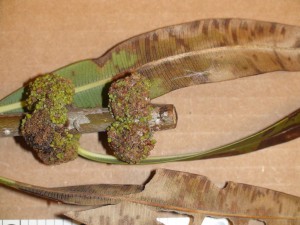 Witch’s Broom Gall is a term applied to growth distortion of woody stems. When something causes the growing tip to die the buds below may produce a tight cluster of shortened stems. This dense cluster of twigs growing from a central source looks like it belongs in a witch’s lair. This may be caused by mites, viruses, fungi, mistletoe, insects or nematodes. On trees, witch’s brooms are easier to see if there are no leaves present. On our evergreen shrubs, infections may go unnoticed until neglect reveals the unsightly growths. 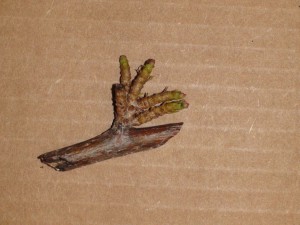 In Florida many of these growths are a result of a fungal infection from Sphaeropsis tumefaciens. Plants in the Florida Keys affected by this disease include oleander, gumbo limbo and green buttonwood. On some of these plants the symptoms produced are a knotty gall.
Control: To deal with infected plants prune branches at least six inches below where symptoms are seen. Prune during dry times, dip pruning tools in a 10% bleach solution between cuts. Infested pruning shears can rapidly spread the disease. Severely infected plants should be removed & destroyed. No chemical fungicides are available to control witch’s broom.
For more information:
okeechobee.ifas.ufl.edu/…/witches.broom.htm
http://manatee.ifas.ufl.edu/comm-hort/plant-problems/oleander-witches-broom.shtml
mrec.ifas.ufl.edu/jos/Sphaeropsis.htm
These links were updated in May, 2011.
Photo credits:
Kim Gabel, UF/IFAS