Our Community Counts: Participating in the 2020 Census

Billions of dollars in federal funding are at stake when it comes to the US Census. The Census data tells policy-makers how much funding is needed by individual communities for our health clinics, school lunch programs, disaster recovery initiatives, and other critical programs and services. Since the Census is only conducted every 10 years, the data we gather now will affect our communities for the next decade.

Self-Responses in Martin County at Less than 70%

The Census will close data-gathering on September 30, and we still have a ways to go to make sure everyone in Martin County is counted. The self-response rate in Martin County, as of September 8, 2020, is 67%. Florida’s self-response rate is currently 62%, and if you add the Census Bureau follow-ups to non-responses, our state’s total response rate goes up to 82% currently. This means about 1 in 5 of our residents have not yet been counted in the state of Florida. We have less than one month to make sure everyone counts. 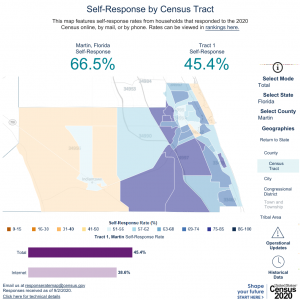 Looking at the map of Martin County on the right, the more rural western area has self-response rates of 41-50%, which is below the county and state average.

What we are seeing in our county is not unusual. Researchers have found that rural populations, African Americans and other people of color, Native Americans, poorer populations, and young children are often under-counted. Looking at the differences between urban and rural census participation, John Green of the University of Mississippi studied 2010 census mail response rates and found that responses averaged 68% for non-metropolitan counties, compared with 75% for metropolitan counties. Reasons for under-counting include difficulties reaching some populations, low literacy or limited English, and distrust of how the information will be used. The Census Bureau addresses difficulties by offering materials in multiple languages, conducting in-person surveys for non-responding households, and sharing information on the how they protect our data.

Census data is especially important for under-served and disadvantaged populations, because it affects vital social services, such as business enterprise grants, home rental assistance, water and waste disposal, health insurance programs, hospitals, child care, food assistance, schools, and early childhood development programs. Here in Martin County, the 2015 Community Health Assessment found that 27% of people in rural Indiantown were living below poverty level (see Table 17 of the report). Comparatively, the proportion of the population living below poverty level in more urban or suburban parts of the county ranged from 5 to 16%.

To learn more about how the census data will impact rural communities and small towns for the next 10 years, visit the US Census’ Our Rural Communities website.

If you haven’t already, respond to the Census before it closes at the end of September 2020. Encourage your friends, neighbors, employees, and other community members to be counted. Census posts and video content are available for sharing on social media, including a social media challenge you can send to your friends to encourage them to be counted. Responding to the Census and encouraging others to do the same will benefit your community and others for many years into the future.

Yvette Goodiel is the UF/IFAS Extension Martin County Sustainability & Commercial Horticulture Agent. You can reach her at (772) 419-6962 or by email to goodiel@ufl.edu