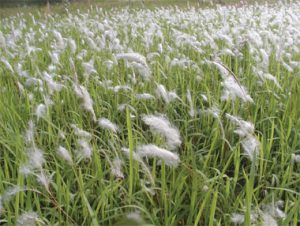 Relentless is a word that comes to mind when I think of the weed cogongrass, partly because cogongrass itself is relentless in its spread, taking over pastures, road right-of-ways and vacant lots. But more importantly this word comes to mind because one must be more relentless than cogongrass to control and eventually eliminate this invasive weed. Marion County is among the worst counties in the southeast for the occurrence of this weed and it appears throughout the county. Once established removal is very difficult, so it is important to recognize the plant and take swift action if it appears in areas where it hasn’t already been observed.

A native of Asia, cogongrass was introduced into Florida in the early part of the 20th century as a potential pasture grass and to stabilize soils. While cattle have been known to graze very young growth, cogongrass is not a preferred forage and the crude protein content is not sufficient for cattle without supplemental nutrients. Essentially, it has no value as a forage.

Florida’s climate, however, is very conducive to cogongrass success. The plant is drought tolerant, so easily lives through the dry season and even droughts. The warm climate is conducive to rapid growth and cogongrass is able to outcompete desirable grasses for nutrients, light, space and moisture. Once cogongrass arrives, left unchecked, it is only a matter of time until it completely overtakes a landscape. It soon becomes a dominant feature in vacant lots, drainage retention areas and road right-of-ways. 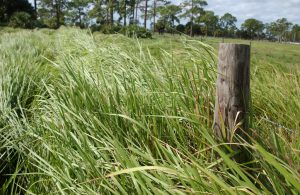 What attributes to cogongrass’ success in competing with desirable plants? It is not what you see, but what lies hidden, beneath the surface of the ground that has the most effect in this plants’ ability to outcompete other species. The root system is vast – encompassing as much as 60 percent of the total plant. In fact, an established cogongrass stand is capable of producing over 3 tons of root biomass per year. If the portion of the plant above ground dies back due to drought, or gets burned off in a fire, no worries; the extensive root system remains intact and will push new growth.

Because it is difficult to control and because it has no value, cogongrass can have a negative effect on property values if a potential buyer understands the difficult task associated with eliminating this weed. The dead leaves in winter and spring present a fire hazard in vacant lots and as cogongrass burns extremely hot, even when green, it poses a fire hazard for residential neighborhoods where it occurs. It is a weed that won’t win points with neighbors who are diligently managing their lawns and pastures if allowed to seed unchecked by irresponsible or lazy land managers. It also poses a danger for purchasers of sod or hay products when these have been harvested from fields infested with this weed. One could argue it poses a moral dilemma for disclosure when selling cogon-laden products to unsuspecting buyers.

Cogongrass is considered a weedy pest in 73 countries and researchers the world over have studied this pest in an effort to develop a control. Relentless is what you will need to be if you are to have eventual success against this weed.

David Holmes has over 30 years experience with the Extension Service and was appointed County Extension Director in Marion County in 1996 with an appointment in Commercial Horticulture. He has served since that time as County Pesticide trainer with licenses in Private Agriculture Application and Ornamental & Turf. ...