Soil pH (potential hydrogen) is an indication of the acidity or alkalinity of soil and is measured in pH units from 0 to 14. Soil pH is defined as the negative logarithm of the hydrogen ion (H+) concentration in the soil. A pH of 7 is considered to be neutral, pH values less than 7 are acidic, and pH values greater than 7 are alkaline. 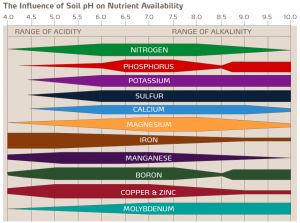 Soil pH directly affects the growth and quality of pasture grasses by influencing the chemical form of many elements in the soil as well as soil microbial processes.

In acidic soils, the availability of plant nutrients such as potassium (K), calcium (Ca), and magnesium (Mg) is reduced, while availability of potentially toxic elements such as aluminum (Al), iron (Fe), and zinc (Zn) is increased. In soils (< 5) pH, the availability of boron (B), molybdenum (Mo), and sulfur (S) is reduced, and nutrient uptake as well as forage production can be reduced. Yellowing of forage and damage by soil borne insects may also be noticed at a pH < 5.0. At soil pH < 4.0, there is the potential for aluminum (Al3+) to become toxic to plant roots.

In alkaline soils pH > 7, the availability of micronutrients such as iron, manganese, zinc, copper, and cobalt is reduced and creates forage production problems similar to increased acidity.

Sandy soils tend to have low clay and organic matter content and generally low buffering capacities. Consequently, soil acidity must eventually be neutralized by applying a liming material like calcium carbonate or dolomite which have the ability to increase soil pH. Dolomite has the added benefit of supplying magnesium, which is often deficient in Florida soils.

All of the no-lime plots declined to a pH of about 4.5. Soil pH of the nitrogen fertilized plots without lime declined to 4.3 in three years.

Damage to bahiagrass sod was more pronounced when soil pH was below 4.5. Two years into into the study, the color of bahiagrass ground cover on pasture B began to decline in response to liming management and fertilizer treatments.

Unlike the unlimed pastures, five years into the experiment, minimum spring color change or damage to bahiagrass sod was noticed for plots limed to pH 5 whether or not they received fertilizer. Sod damage was most severe when bahiagrass pasture was not limed, but received yearly application of any nitrogen containing fertilizer.