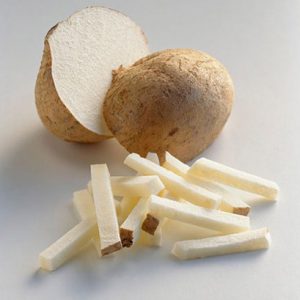 Jicama is a root vegetable native to Latin American. It is also known as yam bean, Mexican turnip and Mexican or Chinese potato. It has become popular in the United States and is available year-round. Jicama is grown in certain parts of the United States including Florida but most are imported from Mexico and South America.

Jicama is low in calories and sodium, is fat-free and is a good source of fiber and vitamin C. According to the USDA Nutrient Database, a ½ cup serving of jicama (sliced, raw) provides approximately 25 calories, 6 grams carbohydrate, 3 grams fiber, 3 milligrams sodium and 98 milligrams potassium.

It is a white-fleshed tuber that ranges in size from 8 ounces to five pounds or greater. The smaller tubers are best for eating. It looks like a turnip in shape and has a thin brown skin with a crunchy consistency similar to a raw white potato and Chinese water chestnut. The flavor is bland which makes it a good addition to many recipes. It is usually shredded or cut into different shapes such as cubes, rounds or sticks and eaten raw but can also be cooked. Popular uses include baked, boiled, fried or roasted like a potato, fruit and vegetable salads, stir-fry, relish and salsa. When selecting jicama, choose roots that are hard, dry and blemish free. Store unwrapped in the refrigerator and use within 2 to 3 weeks. Prepare for eating by washing thoroughly under cool running water. Then peel the brown papery skin and remove stringy roots and the fibrous layer under the peel before cutting and eating. Cut jicama should be covered securely with plastic wrap and can be kept refrigerated for up to one week. Click here for more information on using and preserving jicama. 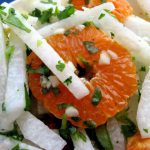