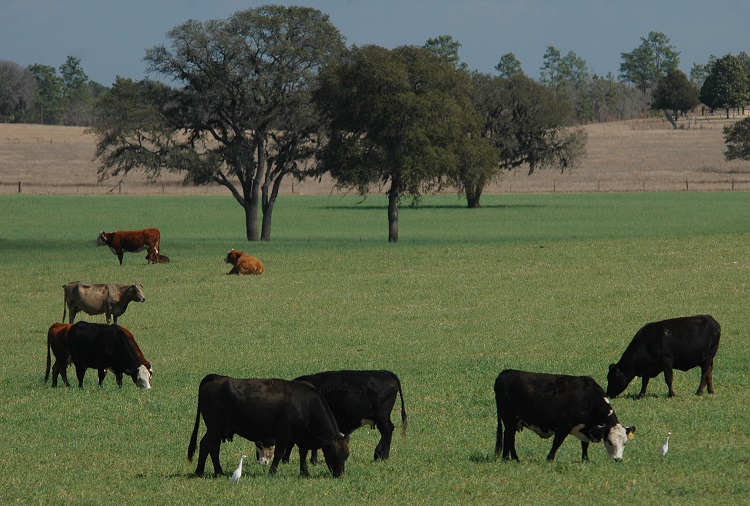 Bahiagrass (Paspalum notatum Flugge), is adapted to climatic conditions throughout Florida and can be grown on upland well-drained sands as well as the moist, poorly-drained flatwoods soils of peninsular Florida. In Florida, bahiagrass is used on more land area than any other single pasture species, covering an estimated 2.5 million acres. Most of this acreage is used for grazing with some hay, sod, and seed harvested from pastures.

Bahiagrass is popular with Florida farmers and ranchers because it: 1) tolerates a wider range of soil conditions than other improved grasses; 2) has the ability to produce moderate yields on soils of very low fertility; 3) is easily established from seed; 4) withstands close grazing; and 5) is relatively free from damaging insects (except for mole crickets) and diseases.

Bahiagrass is an ideal general-use pasture grass. Once established it can withstand heavier grazing pressure than the other pasture grasses in common use. Therefore, horses are less likely to destroy a stand of bahiagrass when pastures are overstocked and grass production is inadequate to meet their needs. However, bahiagrass is not bulletproof and can be damaged by overstocking.

Pensacola is the most widely grown cultivar. It was found growing in Pensacola, Florida in 1935 by UF/IFAS Escambia County Extension Agent, Ed Finlayson.  Pensacola has long, narrow leaves, taller seed stalks, and it flowers earlier than other cultivars. Like other bahiagrasses, it has a fibrous root-system capable of growing to a depth of 7 feet or more. Pensacola has some cold tolerance, but top growth is killed by moderate frosts. In northern Florida more early-season and late-season production can be obtained from the Pensacola types than from other bahiagrass cultivars. Argentine is a selection that was introduced from Argentina in 1944. It has wider leaves, is not as cold tolerant as the Pensacola types, and does not make growth as early in the spring. It is popular in the sod trade because it puts up fewer seed heads later in the season than Pensacola.  Edsel W. Rowan, UF/IFAS Marion County Extension Agent (1955 – 1986) was instrumental getting both Pensacola and Argentine established in Marion County.

At seeding rates used for pastures, it may take two growing seasons to get a stand well-established. Once established, bahiagrass has an aggressive growth habit and forms a dense sod which is relatively easy to maintain. Peak sod density usually occurs in the third year after seeding. For commercial sod production, the use of a higher seeding rate may allow you to obtain peak sod density more quickly.

Stocking rate is about 2 to 2 ½ acres of pasture for each horse in a normal growing season. The same stocking rate would apply to a mare and foal until the baby is weaned, at which time the weanling will require its own pasture space. Stocking rate will vary to some degree, depending on location, type of grass, and size of the horse. In general, when the pasture area is less than one acre per horse, exercise becomes the main use of the pasture and its use as a source of feed becomes secondary. Avoid a situation where there are too many horses on too few acres for too long a period of time. This will result in destruction of the pasture grass and lead to encroachment of weeds.

Soil testing should be used as a guide for applying lime. In southern Florida (Orlando and lower), lime to a pH of 5; in northern Florida, lime to a pH of 5.5. Bahiagrass pastures, once limed to the target pH, will require repeated liming depending on the source and amount of annual N (Nitrogen) application. Pasture may need to be limed again every 2 to 3 years if high rates (> 100 lb/A) of Nitrogen from ammonium sulfate are used annually, but about every 4 years if only 60 lb N (Nitrogen) per acre from ammonium nitrate is applied, yearly. Soil testing for pH every 3 – 4 years as a guide for lime application is essential.

When establishing bahiagrass on new land that is very acid, try to apply and incorporate the lime 6 to 12 months before planting the bahiagrass so that the lime will have had sufficient time to neutralize the soil acidity.

For established stands of bahiagrass, apply fertilizer in the early spring (February – March) to maximize much-needed spring growth. Bahiagrass is a very efficient forager and recovers nutrients from deeper in the soil profile than other popular forage grasses (up to 70% of N applied is recovered), so danger of leaching losses is low. Bahiagrass has a somewhat unique trait of accumulating nutrients in its stolons. It has been estimated that the stolons in a fully established mature stand of bahiagrass that is well-fertilized may contain a reserve of nutrients that will last 2 to 3 years.

← Food Safety for Leftovers
You Be The Judge →