I Want It Now: The Rent-To-Own Conundrum 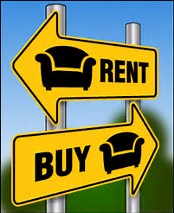 With only one more vacation day remaining before he returned to work to begin the New Year, he lounged on his smelly and worn sofa. “…Finishing out the old year watching an old movie in my old living room”, is how he described his thought process that day.

Returning from the kitchen with his cheese and crackers, he plopped on his sorry sofa. There, unfolding on the screen before his very eyes, was a living room he would be proud to own. It could all be his and so easily! The store was right down the street. They were open and they said they would deliver for free! (All they needed from him was a signature.) Who cares how the movie ended; he had seen it a million times already. He jumped in his car, eager to sign on that dotted line. This year the Super Bowl party would be at his new furnished man-cave. His new and improved living room included a sofa, two easy chairs, and coffee table. He would pay $44.99 for eighty-three weeks. (“Of course he could afford less than $50 a week!” he rationalized.) Paying weekly, he would pay $3,224, all because he wanted it before he could purchase it outright. The pieces retail for about $1,650, one half of what he will end up paying! He wants it now so it will cost more.

Appealing to individuals unable to make a cash or credit purchase, the rent-to-own customer takes possession of the goods right away with little more than a signature. No down payment or credit check are required. The rent-to-own industry (also known as the rental-purchase industry) rents goods and merchandise to consumers, with an option to purchase. Examples of merchandise they offer include furniture, appliances, home electronics, jewelry, and computers. Specialized dealers may offer musical instruments, tires and wheels, or automobiles. RTO agreements are short term; a weekly or monthly term is most common. The consumer is not required to make payments beyond the term of the contract. That means if they continue to pay, they keep the merchandise. If payment is not made, the goods are reclaimed by the dealer. Goods are offered on a temporary basis but the option to purchase is always on the table.

As our friend was soon to learn, purchasing RTO merchandise can be very expensive because goods are priced two to three times higher than retail price. The industry justifies high pricing touting they allow customers to return items after as little as just a week, leaving them with a product that has lost significant value because it is no longer new. They buttress their pricing argument with claims of having to absorb loss for missed or late payments, and damaged, lost, or stolen products. Another rationale RTO’s use for pricing goods significantly higher than mainstream retailers is high labor costs due to pick up and delivery (Isn’t this just part of it?).

Unfortunately, regulation of this industry is limited. The Federal Trade Commission governs credit or lease transactions and these types of transactions are not considered credit transactions. Meanwhile, consumer advocates argue these transactions are not leases, that they are really credit sales and should be subject to federal and state consumer credit laws. In an effort to protect citizens from predatory practices, a few state courts (New Jersey, Minnesota and Wisconsin) have ruled that RTO transactions are indeed credit sales. Advocacy for more regulation continues. In addition to the high cost of RTO transactions, because the consumer is not obligated to purchase the item, payment histories are typically not reported to the major credit reporting agencies — Equifax, Experian and TransUnion. In other words, you cannot build credit making RTO payments.

The Less Money You Have, The More Things Cost

Victor Borge said a mouthful when he declared, “I don’t mind going back to daylight saving time. With inflation, the hour will be the only thing I’ve saved all year.” Indeed, the less money you have, the more things cost. Consider developing a financial goal plan for your next major purchase. You will be better off. Learn how to make a plan by visiting: Building a Spending Plan series http://edis.ifas.ufl.edu/topic_series_building_a_spending_plan

Lynda Spence serves as Extension Faculty in Family and Consumer Sciences for the University of Florida/IFAS Extension in Marion County, Florida. Her areas of responsibility are aging well and financial management education. ...