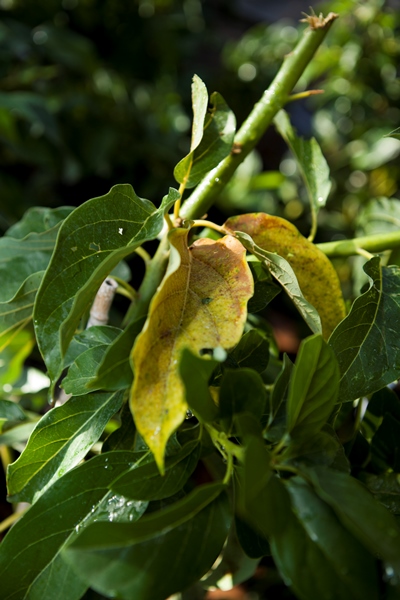 “What is happening to these trees?” The plant diagnostic clinic at UF/IFAS Extension Manatee County frequently receives calls from residents concerned about dying trees along the roadsides.  Trees in the Laurel family, including redbay, swamp bay, sassafras, and our much-loved avocado, are dying from a fungal disease known as laurel wilt.  In the United States, laurel wilt was first detected in Georgia in 2002.  It has since spread throughout Florida and as far west as Texas.  The redbay ambrosia beetle which carries the fungus most likely arrived in packing materials such as wooden pallets or crates.  Movement of infested firewood by people has contributed to its widespread distribution.

Native to Asia, the redbay ambrosia beetle is an interesting little (2 mm) fungus farmer. It digs tunnels in tree wood to make room for a crop of fungus, the beetle’s only food source.  The beetle and the fungus depend on each other for survival.  Separately these two would not be a problem, but combined with laurel tree hosts, a ‘perfect storm’ calamity occurs.

While other types of ambrosia beetles attack stressed, dying, or dead trees, the redbay ambrosia beetle is different.  It attacks live, healthy trees.  The laurel wilt fungus is fairly harmless in other trees but deadly to hyper-sensitive laurel trees.

Laurel trees have such an extreme reaction that they kill themselves trying to contain the fungus.  They do this by blocking off xylem, their water conducting channels. With no water reaching them, the leaves wilt then turn a reddish brown while remaining attached to the stem.  Death occurs in a matter of weeks. Since the brown leaves remain on dead trees for many months, victims of laurel wilt are easy to spot in the woodlands and along roadsides. Once the tree begins to wilt, it cannot be saved and should be removed and chipped or burned.

Florida residents and visitors can help by not transporting firewood from place to place.  Burn dead wood on site, or when traveling, purchase local firewood at your destination.  More information can be found here:  http://bit.ly/2y1IiWB

Urban Horticulture Program Assistant, UF/IFAS Extension Manatee County, 941-722-4524 x 1816, koliver@ufl.  edu A graduate of the University of Florida with a B.