Cuphea, a Pollinator Magnet for Your Yard

Is it possible to find a plant that is easy to grow?

Is it possible to find a plant that is easy to grow (yet non-invasive), blooms steadily for months, thrives essentially pest-free in our north Florida heat and humidity, and attracts loads of butterflies, bees, and other pollinators?  Yes, incredibly, it is – actually it’s several species and an ever-growing number of hybrids and cultivars within the genus Cuphea.  Most Cupheas (over 200 species of evergreen shrubs, herbaceous perennials, and annuals) hail from Mexico and Central America, although a few non-ornamental species are native to the continental US, including blue waxweed. 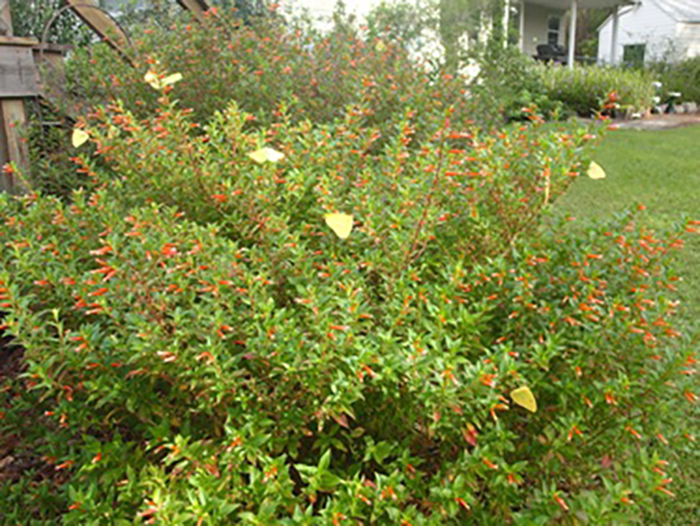 I have several different Cupheas in my mostly sunny yard.  Some varieties can tolerate part shade, but most prefer full sun which keeps them from getting lanky. Two that I planted in the ground are relatively recent hybrids named Cuphea ‘Vermillionaire’ (large firecracker plant) that produce more flowers than other selections.  The bright orange flowers are comprised of long narrow calyx tubes that flare slightly wider at the open end and supposedly resemble a lighted cigar or firecracker.  The tubular flowers are amazingly abundant and cover the entire stems.

The small shrubs are about 3 feet tall and wide, and maintain a compact, mounding habit without any shaping or trimming.  They do lose their foliage if the temperature dips to near freezing, but reliably leaf back out in early spring.  Some horticulturalists suggest in their articles that Cupheas be pruned or cut to the ground in late winter to improve their growth and appearance, but I don’t bother to do it.  I have only fertilized them possibly once in two years, but I did originally plant them in a fertile prepared bed with compost, and I mulch heavily with pine bark nuggets.  The bed also has good drainage.  Cupheas are quite drought tolerant, but in extended dry periods I do provide water via a drip irrigation system.  Lots of pollinators are drawn to the tubular flowers, but hordes (I swear) of cloudless sulphur butterflies cover them in the fall.  In the evening when the butterflies start to roost, I see hummingbird moths darting among the blooms.

Elsewhere in the same planting bed I have a pinkish, lavender bat-face Cuphea that was a pass-along plant from a dear friend.  I don’t know its scientific name, but it may be a cultivar of Cuphea llavea. 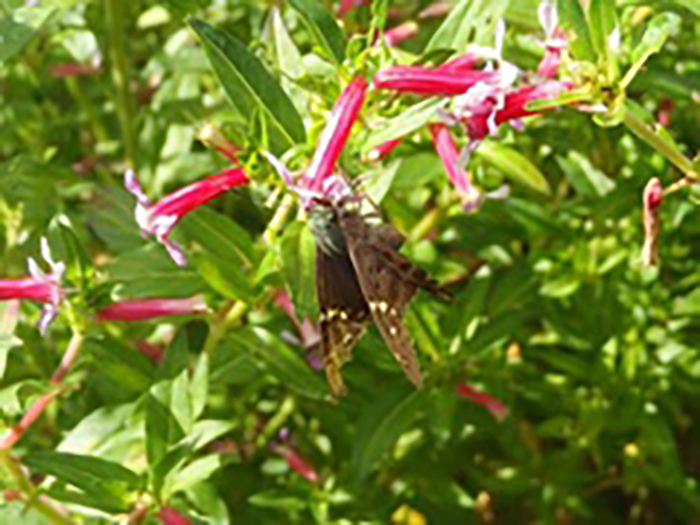 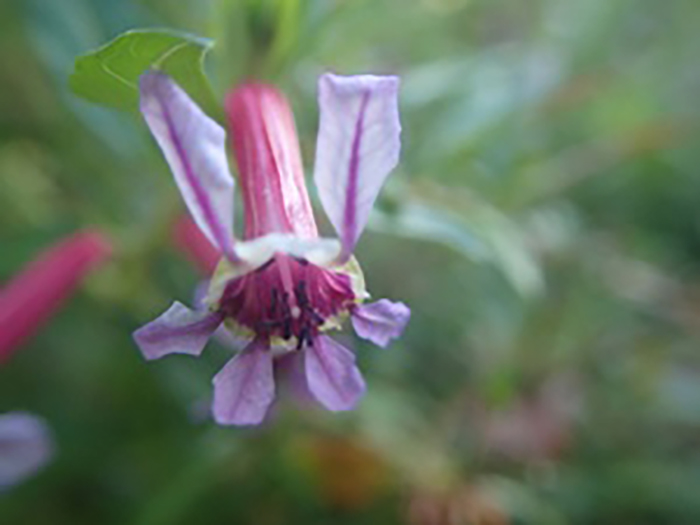 bat-face type of Cuphea, two to six petals form at the ends of the flower tube.  The petals vary in size and shape, while creating the appearance of little pointed wings – thus the name.  I’ve noticed that long-tailed skipper butterflies are particularly attracted to the lavender flowers.

Also in the genus Cuphea (somewhat surprisingly to me) is the Mexican or false heather, Cuphea hyssopifolia.  It produces small flowers with six spreading purple or white petals and green calyx tubes.  Due to its compact size, it is often used as an edging plant along paths or borders. 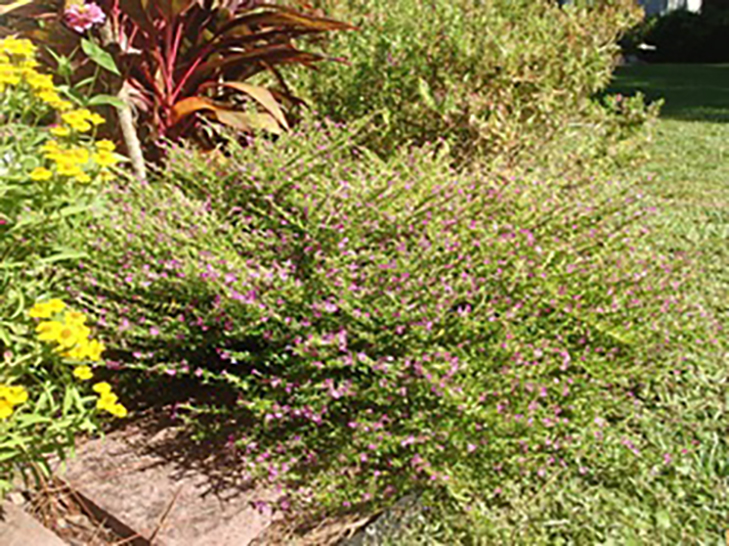 I planted a purple one next to my bat-face Cuphea, and it has become an attractive groundcover in that part of the bed. It’s pretty dark purple star-like flowers and lacy green leaves complement the larger lavender bat-face shrub.  It, too, seems to primarily attract long-tailed skippers, but also lots of different bees and wasps.  I can often literally hear them buzzing when I walk by the plant.

Cupheas are easy to propagate from seeds and cuttings, plus transplants can be purchased from many garden centers.  They also do well in containers and hanging baskets, so anyone can grow these vibrantly flowering plants and enjoy the many pollinators they attract.

For more information on growing Cupheas, check the following sites:

Cigar Flower – University of Florida, Institute of Food and Agricultural …