Several years ago one of my sons picked a bunch of large, reddish-purple berries from a tree at Innovation Park where he works. They were soft and very sweet, but they lacked the characteristic tartness of blackberries, which they resembled—and blackberries don’t grow on trees. They were mulberries and they made a fine fruit crisp.

I recently moved to a different home, and curious about an abundance of mid-sized trees along the edges of my new yard, I made inquiries. When I determined that they were mulberry trees, I immediately thought of the fruit crisp made from foraged fruit.

Then I began to notice many seedlings coming up in my lawn and along the property line. The larger ones had leaves similar to the mulberry trees. I thought this might be too much of a good thing. Further investigation revealed that these mulberries were indeed a scourge rather than a windfall.

Mulberries are deciduous, fast-growing, medium-size trees, most growing 30 to 60 feet tall. They have large heart-shaped leaves with finely serrated margins. The leaves can have three deep lobes, or be unlobed, or mitten-shaped, all on the same tree. Like blackberries, the fruit, usually about one inch long, is a cluster of many small drupes, each containing a seed and developing from a separate flower, but in mulberries, the seeds are almost undetectable.

Red mulberry (Morus rubra), a North American native, grows throughout the eastern United States in a variety of habitats. It prefers moist sheltered soils along streams and in flood plains. Whether from hybridization or disease, red mulberry is becoming increasingly scarce. It has large, sweet, flavorful fruit which is dark red to almost black. Its leaves are dull dark green, rough on top, and slightly hairy on the underside.

White mulberry (Morus alba), native to China,is the type used to raise silkworms. It is a short-lived tree known for catapulting its pollen at over half the speed of sound. It was introduced into our country with the goal of starting a silk industry, which did not materialize. The white mulberry tends to cross-breed with the native red mulberry, which it is displacing in many areas, and is listed as invasive in parts of the country. It has been reported in our area, but is not designated as an invasive plant in Florida. The sweet but bland fruit can range from deep purple in the wild to pink or white in cultivated plants. Its leaves tend to be bright green and shiny on top. Any hairs on the underside occur along the main veins. Where red mulberry can be found in partial shade, white mulberry prefers the sun. A fruitless variety has been developed as well as a weeping cultivar, which are suitable for landscaping.

Black mulberry (Morus nigra), native to Southwestern Asia, has been grown throughout Europe and around the Mediterranean for centuries. It is not grown widely in the US, but is reported to be suitable for our growing area (8b). It tolerates heat well enough, but does not care as much for humidity. It is a smaller tree, growing only 20 to 30 feet high, and can be grown in containers, where it can be pruned to restrict its growth. It can be distinguished by its uniformly hairy lower leaf surface. It will tend to be a bush unless trained when it is young. Its fruit is intensely purple, and is reported to be the most flavorful and juicy of all mulberries. 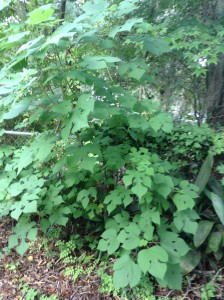 Paper mulberry (Broussonetia papyrifera) was introduced into the US as an ornamental tree, and was used in its native China and Japan to make paper. In Hawaii and other parts of the South Pacific, its bark is used to make cloth. This is the variety now invading our fields and forests as well as yards, including mine. It is on the Florida Exotic Pest Plant Council’s list of invasive plant species. It is a large shrub or small tree up to 30 feet in height. In immature trees and shrubs, the bark has a green and brown camouflage effect. It can be identified by its hairy, reddish brown leaf twigs. Its fruit is reddish-purple in color.

In addition, a weed from the same botanical family (Moraceae), the mulberry weed (Fatoua villosa), is common in our area, ranging from a few inches to over four feet tall. A native of Asia, it was first found in the US in the 1950s and is becoming more of a problem. Seedlings resemble those of the paper mulberry.

Like many invasive plants, mulberries are attractive, fast growing trees, which provide shade in the summer, and the additional benefit of fruit which attracts birds and other wildlife. They can be messy, dropping their large leaves in the fall, and any fruit not eaten by birds or other wildlife in the spring.

Unwanted seedlings can be easily pulled up.   Larger shrubs and trees can be cut and the stumps immediately painted with  brush killer to prevent sprouting. Some sources indicate that painting the bark of larger trees with triclopyr has also been successful. Repeated applications may be necessary. Unless the “mother tree” can be located and disposed of, eradication is an ongoing process.

Native plants which can be used in the landscape in place of mulberries are red maple (Acer rubrum), catalpa, (Catalpa bignonioides), sugarberry (Celtis laevigata) or black gum (Nyssa sylvatica),

Janis Piotrowski is a Master Gardner volunteer with the UF/Leon County Cooperative Extension Service. She host blogs about gardening and sustainable living in North Florida at www.northfloridavegheadz.blogspot.com and www.northfloridapermaculture.blogspot.com. For gardening questions, email us at Ask-A-Mastergardener@leoncountyfl.gov

← Composting Made Easy
Got Pollinators? →