Curiously the roadwork has unearthed evidence of a very different Wakulla County still present today, but rarely recognized. All one has to do is look at the boulders and rock turned up for the confirmation of a time before human occupants arrived.

From a geological standpoint, the Florida landmass known today is a very recent occurrence. It is thought glacial activity caused the Gulf of Mexico to retreat several time exposing what would become Florida during the Pliocene Epoch.

Limestone deposits close to the surface also aided the process. Over time some of the deposits dissolved and produced caves and sinkholes which are still evident 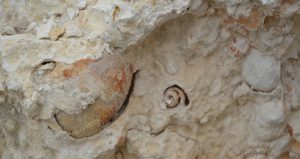 If the long term conditions were suitable, the shell had a high concentration of calcium carbonate it could survive to the present. If not, then only the imprint had the potential to last.

Shark’s teeth are the most commonly encountered Florida fossil. In many cases, only the tooth’s color has been changed and it is still as sharp as when the sharks were using them.

Shells and shell imprints, sea urchins, and bones from fish and marine mammals are also in the solidified mud from a distant time. Most are broken, but occasionally a complete specimen is encountered.