The first time Tolulope Morawo heard about the ability of beneficial insects to protect food crops from pest insects, he knew he had found his lifelong career.

In 2009, Morawo learned from a lecture that phorid flies kill fire ants by laying their eggs inside the ants. When the next generation of flies emerge from inside the ants’ heads, the ants die. At the time of the lecture, Morawo was an undergraduate university student in his native Nigeria. The moment was pivotal; it drew Morawo to the multifaceted field of entomology. 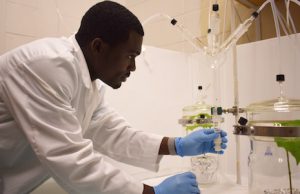 In mid-April, Morawo began a new position as an assistant professor of entomology at the University of Florida’s Institute of Food and Agricultural Science’s (UF/IFAS) Indian River Research and Education Center (IRREC) in Fort Pierce. He joins UF’s statewide effort to protect crops and natural environments with integrated pest management (IPM) strategy.

“Dr. Morawo’s contribution to Florida’s food producers and caretakers of native flora is valuable because he brings the most current research techniques and perspectives to our IFAS team of biological control research scientists,” said Ronald D. Cave, director of IRREC. Morawo succeeds Cave as entomologist and research scientist at UF’s Norman C. Hayslip Biological Control Research and Containment Laboratory. The lab is one of only three facilities in Florida that include both non-quarantine and containment laboratories for the study of exotic insects that may be beneficial to Florida food production and protection of natural resources.

Cave said Morawo will lead invasive insect research at the Hayslip laboratory and will introduce the latest IPM research techniques, including chemical ecology. The phorid fly against fire ants is an example of how an insect’s natural enemy controls its negative impact on our environment. Similarly, a wasp imported from Asia is an effective enemy against the Asian citrus psyllid. When scientists import and introduce an invasive insect’s natural enemies into an environment, the practice is called classical biological control. Biological control plays an increasing role in integrated pest management for crop protection. Other elements IPM include natural fungi, cultural practices, and chemical controls when necessary.

Chemical ecology helps us identify natural compounds that insects use to find plants or other insects. The compounds can be used to modify insect behavior to achieve pest management. In 2017, Morawo completed a Ph.D. in entomology at Auburn University, where chemical ecology of parasitic wasps was the focus of his doctorate thesis to protect cotton from caterpillar pests.

Morawo earned a master’s in entomology at Auburn University, and a bachelor’s of technology in biology at the Federal University of Technology, in Akure, Nigeria. His master’s thesis also involved biological control agents. Morawo received several awards, including the Friends of Southern IPM Award in 2017. He comes to UF/IFAS from Auburn University where he was a postdoctoral fellow.

Morawo’s vision for IPM in Florida is underway. Aspects of his research will focus on the management of citrus pests such as the Asian citrus psyllid and Lebbeck mealybug. Both insects are invasive and impact the state’s citrus industry. The psyllid carries a pathogen to citrus trees that causes citrus greening, a devastating tree crop disease. He joins a team of four scientists at IRREC who are working on the pathogen, its transmission, and the impacts the disease has on trees. Morawo will focus on the interactions among trees, psyllids, and their natural enemies such as parasitoids, predators and fungi. Other research projects will involve biological control of new invasive pests, development of new pest detection tools and statewide monitoring for invasive insects.

“The recovery of the citrus industry from citrus greening or any other tree stressors will be a multidisciplinary collaborative effort,” Morawo said. “The good news is those efforts are already ongoing and yielding results.”