As 2019 came to a close, I took a moment to reflect on the accomplishments of IRREC research scientists, students, and staff members. Choosing which to highlight for the “2019 IRREC Top 12 Achievements” was no easy task. Graduate students won multiple scholarships and other place awards, and faculty members garnered an impressive amount of funding for research that is and will continue to improve crops and natural resources for people everywhere. During the final days of 2019, we remember a good year. Our top concern this year — and moving forward into 2020 — has and will continue to be to develop best management practices to produce world-famous grapefruit on HLB-affected trees. 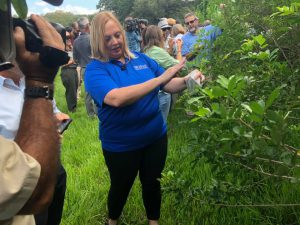 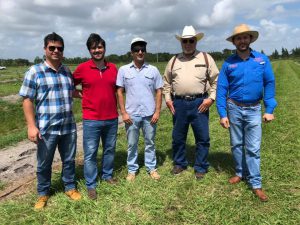 2. In 2019, we saw the restoration of the Millennium Block, first planted in 2000. Supported by funding from the Office of the Dean of Research and the Citrus Research and Development Foundation, Inc., Dr. Rhuanito “Johnny” Ferrarezi led efforts to replant the block this summer and into the fall. More than 5,000 young citrus trees are rising from the experimental grove that was in a 2005 canker rule, pushed and burned. The young trees hold promise that we may identify an HLB-tolerant rootstock/scion combination citrus variety that will be the best grapefruit tree resistant to the debacle of Huanglongbing, or HLB, or citrus greening. The new grove is outdoors, unprotected from HLB. The rootstocks and scions being tested were But most of the trees were bred by UF/IFAS and USDA/ARSplant breeders for more resistance to HLB. If only one of the trees survives HLB, the experiment will have been a resounding success because we will meet the needs of our growers, those who we serve every day.

3. Success and achievement for our research programs arise from trials designed and carried out by research faculty members. But, success for our scientists comes in part by their supportive staff members. One is Cuifeng Hu, biological scientist for Dr. Mark Ritenour. Cuifeng was in 2019 recognized with a well-deserved UF/IFAS Superior Accomplishment Award. Please read about Cuifeng’s superior work here. Her accomplishments are a result of her novel and persistent approach to support our post-harvest program, and especially the development of new cultivars samples for statewide growers to consider for their groves.

4. PhD graduate student Emilie Demard won first place in the student competition at the Acarologicaly Society of America symposium held in November, in St. Louis, Missouri. And on top of the highest point of graduate student achievement for the event, she won an abstract award of $400.The title of Emilie’s presentation was: “Diversity and abundance of predacious mites in Citrus Under Protective Screen (CUPS).”

5. More than 200 2-dimensional cameras were installed below the ground surface of the ground in citrus research groves throughout the entire Indian River region. Dr. Lorenzo Rossi, along with his staff and graduate assistants, performed the work in a short amount of time. Now, IRREC can contribute data to the body of knowledge about plant root biology work for citrus crop production throughout the entire state.

6. Dr. Mark Ritenour guides all of Florida’s fresh fruit growers as they manage export and food safety issues. For many years, Dr. Ritenour has provided the most current information for shipping regulations and pesticide residue limits to each of the countries to which our producers ship fruit. In 2019, more than a few growers were able to reroute a container of fresh fruit when European officials suddenly lowered the levels for a particular product widely used in the Indian River region, saving the growers an unknown amount of money.

6. Dr. Lorenzo Rossi led a 5-day course titled, “Linking Root Architecture to Function: Theory, Methods, and Technology,” in Orlando. The course attracted the nation’s leaders as guest lecturers, a few international lecturers, and graduate students from all over the nation, including IRREC graduate students. Interest in the course was so high that, Dr. Rossi is planning a global event for 2020.

8. As chair of the 2019 Florida Citrus Show, Dr. Rhuanito “Johnny” Ferrarezi was able to feature a long list of authoritative speakers who covered the topics for which growers were most interested. UF/IFAS citrus breeders showed many new varieties expected to tolerate and resist HLB. A high number of attendees was also a sign of event success.

9. Dr. Cortney Ohs reached a new height of aquaculture species cultivation. A total of 20 fish species are in cultivation inside the Hatchery Building at the IRREC Aquaculture Demonstration Site on Picos Road. The species are hatched inside the facility and grown out. Some have spawned. All of the species could be adopted by the industry if they prove to be viable for production. Dr. Oh’s work supports an important aquaculture industry that works to meet needs in the aquarium and seafood industries. Some of the fish species include hogfish, sailfin snapper, Atlantic blue chromis, blue tangs, and many more colorful species.

10. Dr. Pasco Avery and I with other UF/IFAS scientists were recognized with a “High Impact Research Publication Award” for an article titled “Identification of the Achilles heels of the laurel wilt pathogen and its beetle vector” published in the May 2018 edition of Applied Microbiology and Biotechnology, an international scholarly science journal. 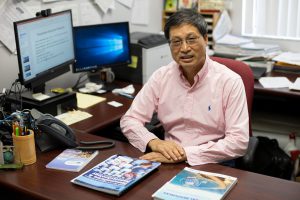 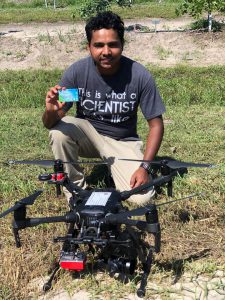 12. MSc graduate student Dinesh Phuyal, who works under the leadership of Dr. Rhuanito “Johnny” Ferrarezi, won four scholarships in 2019. Phuyal garnered a prestigious Yara North American Crop Innovation Scholarship and three travel scholarships, two of which funded his July attendance at the American Society of Horticultural Sciences meeting in Las Vegas, Nevada. A fourth award was from The Center for Stress Resilient Agriculture that took him to the course “Linking Root Architecture to Function” in Orlando.