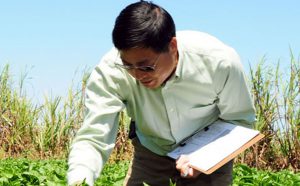 Zhenli He, professor of soil fertility and environmental chemistry and associate director for the University of Florida Institute of Food and Agricultural Sciences Indian River Research and Education Center (IRREC), will be honored for outstanding research contributions made to his native China.

He will be presented with The Kingenta Agricultural Science Award at the American Society of Agronomy annual meeting to be held Oct. 25 in Tampa, Florida, according to Sara Uttech, senior manager-governance and membership for the ASA.

“Zhenli He is a brilliant scientist, with an outstanding record in his research and teaching roles at IRREC and abroad,” said IRREC professor and Director, Ronald D. Cave.

Each year officials with the ASA conference recognize one agronomy research scientist throughout the world who has made outstanding contributions to China’s agricultural and environmental sciences.

Of the seven recipients who have achieved the Kingenta award since its 2011 inception, three have represented the University of Florida. Other recipients represented universities in China, Oklahoma, Massachusetts, and Iowa.

Among He’s outstanding contributions to China’s agriculture are his talents to train more than 30 scientists in his soil and water science laboratory at IRREC, many who hold or achieved professorships at Chinese universities.

This year alone, seven Chinese scientists will receive training in He’s laboratory. In his role as a courtesy professor for both Zhejiang University and the Chinese Academy of Tropical Agricultural Sciences, He serves on committees to direct graduate school education and advise students with experiment design for environmental ecology programs.

A world leader in soil and water science, He is a director of the U.S.-China Agricultural Science Research Forum. He said the forum conducts an annual symposium for the two nations’ top scientists during which the world’s most compelling environmental issues are discussed. This year, forum members will address global warming and its impact on soil and water resources.

Last year, He published a book, “Phosphorus Management in Crop Production,” along with a colleague who represents the U.S. Department of Agriculture and another from a Brazilian university. The three scientists published the book in an effort to increase use efficiency of phosphorus by crops so that more food can be produced to serve an increasing world population.

In addition to this most recent award, He has been recognized with a number of international, national and university awards. His most prestigious are as a Fellow by both the Soil Science Society of America and the American Society of Agronomy, the highest point of achievement for both of these international organizations. In 2015, he was recognized with a Distinguished Career Award by the Association of Chinese Soil and Plant Scientists in North America.

The Kingenta Award is funded by officials with Kingenta Ecological Engineering Group Co., a prominent Chinese corporation that produces crop protection products for the global market.