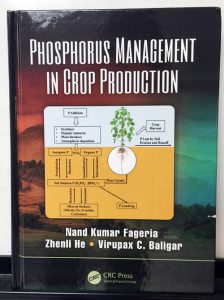 A UF professor and two colleagues have published a book in which the three scientists offer the world’s most innovative techniques for managing an essential nutrient in food production soils. With the world’s population expected to reach 9 billion by the year 2050, scientists are searching for ways to make soil more productive so that more food may be produced.

Zhenli He, professor and associate director at the UF Institute of Food and Agricultural Science’s Indian River Research and Education Center near Fort Pierce, along with Virupax Baligar, a research scientist with the U.S. Department of Agriculture, published the 360-page book, “Phosphorus Management in Crop Production.”

Baligar and He’s colleague, Nand Kumar Fageria, who had served as a senior research soil scientist at the National Rice and Bean Research Center in Goias, Brazil, had been authoring the book until his sudden death in 2014.

“Dr. Baligar and I wanted to finish the work started by our friend and research partner, Dr. Fageria, with whom we collaborated for many years,” said He. “We are honoring his work and publishing his soil management techniques to improve phosphorous use efficiency in the range of cropping systems.

“Most of the world’s arable soils face phosphorous deficiency,” said Baligar. “That’s significant because these very areas need to produce greater amounts of food to meet the demands of the world’s growing population.”
He said the three primary soil nutrients necessary to produce foods rich in vitamins and fiber are phosphorous, nitrogen and potassium. The new book promotes soil management with an emphasis on phosphorus. He’s entire career has been devoted to the study and improvement of phosphorous in soils, which began with his Ph.D. thesis in soil environmental chemistry at Zhejiang University in China.

“We found that phosphorus is deficient in a majority of arable soils in the world where we expect more food production as the world’s population continues to increase,” said Baligar.

Baligar said “weathering” is an important topic discussed in the book. It occurs both on and beneath the surface, in soils with greater amounts of water movement. Most prevalent in tropical and sub-tropical areas, weathering causes significant phosphorous losses through leaching and erosion.