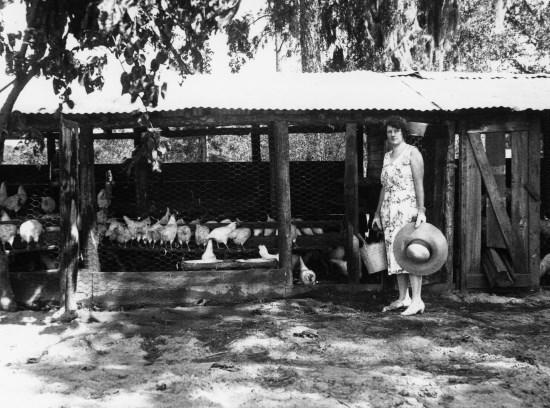 In the early days of Extension, agents lived on the road, made frequent house calls, and had to be experts in a wide range of fields. Here is an account from Ruth Elkins, a Polk County Home Demonstration Agent active 1939-1972:

“In the early days, the trunk of my car had bulletins and all kinds of information. I worked with people who received mail only once a week. Some of them could not read or write. I had graduated from Florida State College for Women (now FSU) and over its library was this quotation: “The Half of Knowledge is to Know Where to Find It.” I very often went to the trunk of the car for information.

“There was not a veterinarian in the county at the time and a federal bulletin came in handy one day when I visited the home of a county commissioner who was also a poultry farmer. I had been invited to show the wife how to use the pressure cooker to can.

“The husband told me about a problem with his chickens dying. I suggested that he might use the USDA bulletin and make an autopsy on a dead chicken and might find a solution to his problem. Having been brought up on a poultry farm, I soon found myself with knife in hand, cutting into a dead chicken and showing him his problem—worms. The government bulletin outlined the treatment. The local druggist was able to fill the prescription and the problem was solved.

“As a result of this experience, I became a good friend of all the poultymen in the county. One afternoon when I returned home from work one of the leading poultrymen was waiting for me. He insisted that I go home with him because he had chickens dying. I told him that I was a home economist and not a veterinarian but he insisted that the county commissioner said that I knew more about their problems than anyone else in the county. I went, and again it was worms. Thanks to the federal bulletin, we solved the problem.”