The urban forest has the capacity to provide habitat for birds. This is important because birds make significant contributions to the function of the urban forest ecosystem.  Songbirds birds and raptors provide pest control of insect outbreaks and rodents, and vultures and other scavengers dispose of waste (Luck et al. 2011).

Birds deliver ecosystem services that have direct benefits to people. Birds support our quality of life by boosting cultural and spiritual well-being, enhancing aesthetic experiences and strengthening sense of place (Luck et al. 2011). According to a study by the University of Exeter (UK), involving hundreds of people, vegetation cover and afternoon bird abundances were positively associated with a lower prevalence of depression, anxiety, and stress (Cox et al. 2017). For the majority of people in urban areas, birds represent their most frequent and consistent contact with wildlife.

Almost anywhere you go, you can find birds. But while birds remain everywhere, people are actually seeing far fewer of them than just 50 years ago. Bird population losses have been documented for much of the North America over the past 48 years. These losses include once-common species and are associated with most regions and habitats. Recent scientific investigations indicate a net loss approaching 3 billion birds, or 29% of the recorded 1970 abundance. That is 1/3 less birds present today then in 1970. 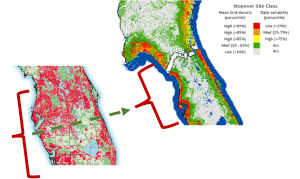 Habitat for a bird, means that it contains everything it needs to find and gather food, select a mate, and successfully reproduce. The main components of a habitat are shelter, water, food, and space. A habitat is said to have a suitable arrangement of these four components.

I do not want to oversimplify this idea of managing habitat in the city and the complexity in the varying degrees of specificity among bird species for food, water, cover and space. Some birds are specialists with a narrow range of preferred foods and plant communities they call home. They often have a difficult time adapting to the changes associated with urbanization. Many of our most endangered and threatened species are Specialists such as the Florida scrub jay. Other birds, are generalists, with a wider range of acceptable levels of the four habitat components and are better at adapting to change.

How much does this really matter when making daily operational decisions? It can matter a great deal if you are affecting the habitat of a legally protected species such as the Florida scrub jay. Then you need to work with  Florida Fish and Wildlife Commission following their management guidelines. For bird species of non-endangered species of local concern or interest authoritative  bird habitat information can be obtained through non-profit organizations such as the Cornell Bird Lab, Audubon Society and universities.

So what can we do without getting deep into the habitat requirements of each individual bird species? Let’s look at couple of key attributes of bird habitat that the municipal arborist, urban forester, landscape architect or consulting arborist affect directly on a daily basis in Part 2 Management.