The rapid urbanization of Florida is evidenced by the expansion and densification of cities, and continued population growth. The Florida 2070 Report, a joint effort of the Florida Department of Agriculture and Consumer Services, 1000 Friends of Florida and the University of Florida’s Geoplan Center, provides us with a roadmap to Florida’s urban nature.

According to the Report the state’s population will have nearly double by 2070, with a need to accommodate 15 million new residents. The greatest growth in population will occur in the Central and North East portions of the peninsula. To accommodate this growth, the percentage of developed land will increase from 18% (2010) to 34% (2070) for the total land area of Florida. While protected lands, excluding agriculture, will increase by less than 1%. Agricultural lands will decrease from 22% to 16% of Florida’s total land area. These changes suggest a very significant loss of vital ecosystem goods and services for future generations due to the loss of forest lands, wetlands, grasslands and agriculture. 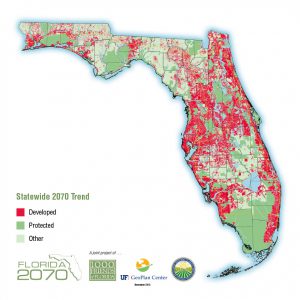 By 2070 existing patches of natural areas – forest, grassland, wetland and scrub – will be swimming in a sea of urbanization. Florida’s natural lands, both public and private, are going to be absorbed into our metropolitan regions. Their continued presence and future management will more closely reflect the values of the region’s urban residents and their local governments. Outcomes for management will increasingly be aligned with societal measures of sustainability. The rural character of many parts of Florida will be transformed by the emerging urban landscape.

So how might this affect the discipline and future practice of urban forestry in Florida.

Urban Forestry is a new discipline, and the social, economic and ecological targets of the discipline is still evolving. Its growth should be guided by ecological science, experience and common sense. With these expected changes, there is much to learn over the coming decades. We will need to be more active in sharing our knowledge, both successes and failures. We need to do it all the time and as often as possible. This includes not only webinars but also other medias including newsletters, open forums, blogs, social media and just a plain old phone call. There is a tremendous amount of knowledge being generated by the people who are actively working on the ground. In Florida, the Urban Forest Council has done yeoman’s work at keeping the community of urban forestry informed during the past 30 years, but it is not enough. They cannot do it alone. One recommendation has been the development of regional working groups which can play an important role in information exchange, fostering cooperation and building supportive collaborative programs.

The frantic pace of change in Florida points to the critical need for the urban forestry profession to deliberately and actively embrace its pivotal leadership role in the design and interdisciplinary management Florida’s future urban and urbanizing forests.