Habitat fragmentation leads to increased edge and shifts in microclimate along the edge. Edge influences several abiotic aspects of habitat including light, temperature, humidity, and wind (Schelhas and Greenberg 1996). Edge effects are moderated by aspect, slope, hydrology, soils, and adjacent land use. All of these environmental factors affect the suitability of the habitat relative to species composition and vigor. 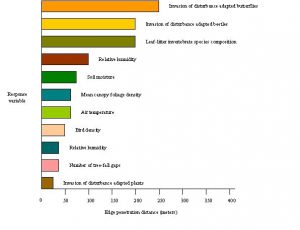 Calculation of edge to interior habitat ratios provides a measure that is often used to compare the relationship of edge to the area of a fragment. If the area/perimeter is low, the average distance from an interior point to the edge is short. Interior species, those requiring unfragmented forest for habitat, can then be expected to do poorly. A lower area/perimeter ratio also indicates that more management, including more energy, money, and time, is necessary to maintain the interior characteristics of the forest.