The dominant paradigm of ecology through the 1970s was the equilibrium, “balance of nature” perspective. Ecosystems were thought to have a stable point equilibrium, a climax state, structurally and functionally complete and self-regulating. Such systems contained wildlife populations which fluctuated only slightly from year to year, with different species keeping others in check. If the system were disturbed it would return to a trajectory that led it back to the climax condition (Meffe and Carroll 1997). These ideas led managers to believe that a particular unit of nature could be conserved by itself and that these units could maintain themselves in a stable and balanced condition indefinitely, and if disturbed they would return to their former condition (Pickett et al. 1992).

During the 1980s and 90s empirical evidence contradicted the concept of equilibrium. The non-equilibrium perspective that developed recognizes that ecological systems are rarely in a stable state; that they are open to exchange with the larger landscape; they are not internally regulating; and their internal structure and function are directly affected by periodic disturbances. The perspective emphasizes process, dynamics, and context rather then end-point stability (Pickett et al. 1992). 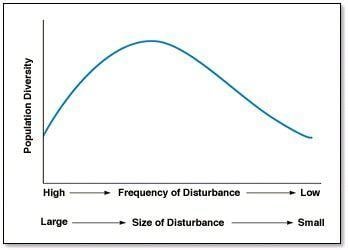 An important concept in the study of disturbance is the intermediate disturbance hypothesis (Connell 1978). It states that the maximum species richness in many systems occurs at intermediate intensity and frequency of natural disturbance. At high levels of disturbance only those species that are adapted to disturbance are successful. When disturbance levels are low the competitive advantage shifts to other species, leading to local extinctions. Within larger ecosystems, such a natural pattern of disturbance and community reorganization would lead to a shifting state, with local extinctions and recolonizations occurring as the environmental and biological aspects of the landscape changed.

The non-equilibrium disturbance hypothesis implies that: 1. a specific reserve is not easily conserved in isolation from its surroundings, 2. reserves will not maintain themselves in a stable and balanced condition over long periods of time; and that 3. reserves will incur natural and human disturbances that will change their state. The non-equilibrium theory tells us that nature preserves will not succeed simply by being locked up and protected from human society.