At the 2018 Florida State Fair, the Charolais Open and Youth Cattle Show was a welcome sight. With so many cattle producers in Florida using Charolais sires in their terminal cross-breeding systems, we should see the breed more often. Cattlemen primarily purchase these bulls outside of the state of Florida because Charolais seed-stock producers are not prevalent here. If you have opportunity to buy locally, just know there are some quality cattle out there.

There are some interesting facts to consider should you choose to investigate the idea of using Charolais. Classed in the Continental 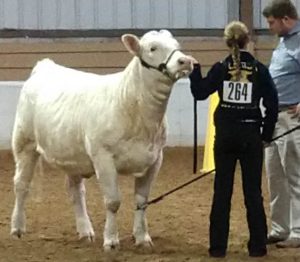 breeds, Charolais are from the mainland “continent” of Europe, specifically France. In the late 1700’s, farmers selected the cattle and chose them for their size and muscling, particularly to provide draft power. The Charolais breed we have in the United States is not fully derived from the French herd because cattlemen here used upgrading to grow the very limited herd numbers that were available up until the 1960’s. Our cattle are considered purebred if they reach a 31/32 level of Charolais blood.

Charolais are white or creamy in color and have a shorter hair coat in summer but will thicken and lengthen their coat in cold weather. Their skin carries an appreciable amount of pigmentation which is important when considering health issues, such as cancer eye, that are aggravated by our intense sunshine. The cattle are noted for being aggressive grazers in warm weather. This is probably why cattlemen have observed that Charolais bulls maintain condition and hold up rather well during the breeding season. The underlying key to success in this arena is purchasing moderate frame-size bulls to begin with.

There are two major things for you to ponder if you look at this breed for your herd. First, efficient, heavier muscled calves are a ‘plus’ in the beef sustainability arena. If you produce a calf that will produce more beef per square inch it occupies (because of improved genetics), then less resources are utilized. Although a rather simplified explanation, in general this is true keeping health and management plans the same.

The second point is that little, hidden gem called the dilution gene. The Charolais breed genetically overtakes the color of other breeds in a cross-breeding system. When bred to black cattle, the offspring will be a gray or “mousy” color. When bred to red cattle, they will appear a golden or “peach” color, if you will. So, if you were to market your calves in a manner other than direct sale to a buyer (at a livestock market), you will automatically build into your calves a label that says “my sire was a Charolais bull.” This could potentially add value to your cattle in the eyes of the buyer.

Laura earned a Masters degree in Animal Science at the University of Florida, in conjunction with the USDA STARS Research Station that was in Brooksville, studying forage-finished beef grazed on Perennial Peanut. ...