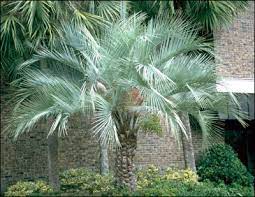 When it comes to lanscape palms, Pindo palms (Butia capitata) are remarkable in that they are one of the few cold-hardy palms, tolerating temperatures below freezing, without the customary ‘freezer burn’ typically seen on other palm species after a cold-snap.  In addition to its distinctive appearance with feathery, blue-grey fronds, Pindo palm fruit can be used to make jelly, and mature Pindo palms have been known to hybridize with the Queen palm (Syagrus romanzoffiana), producing ‘mule’ palms.

Pindo palms grow up to 15 ft. wide having a solitary growth habit, and like most palms, do best when grown in full sun, on well-drained soils. At maturity, Pindo palms grow to be between 15 to 25 ft. tall, and while not as tall as many other palm species which can get to be 30 to 70 ft., it is still important to ensure that Pindo palms are not planted in the way of overhead utility lines.  Click on the link to learn more about Pindo palms.

As is common in many palm species, Pindo palms can experience potassium deficiency, evident by translucent yellow spots on frond leaflets. To learn more about nutrient deficiencies and palm nutrition, click on these links: potassium deficiency and fertilizing palms.

Pindo palms are relatively pest and disease free, with the occasional occurrence of Ganoderma zonatum mushroom conks at the base of the trunk. Ganoderma can affect all palm species, so it is important to avoid injuring the trunk during routine landscape maintenance, as trunk injuries make palms more susceptible to diseases. Click on the link for more information on Ganoderma.

As mentioned in our previous blog posts about caring for palms, due to their unique nutritional requirements, when pruning palms, green fronds should never be removed, because palms recycle nutrients from the older outer fronds, to the newer inner fronds. When pruning palms, only spent flower stalks, immature fruit, and brown fronds should be removed. Over-pruned palms are more susceptible to nutrient deficiencies, pests and diseases. Click on the link  to learn more about pruning palms.